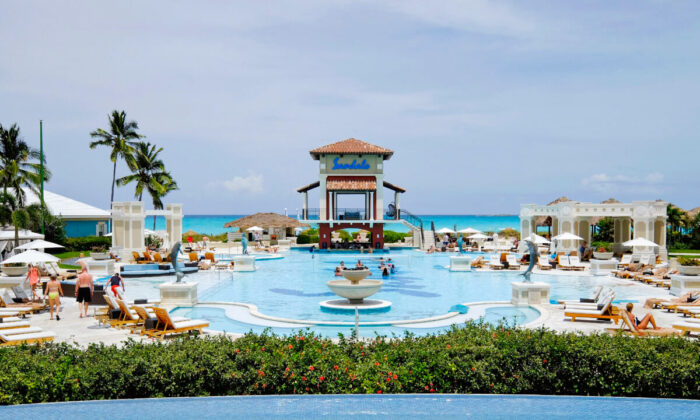 A U.S. tourist was found dead this week at the same Bahamas resort where three other Americans died earlier this year, officials said.

The man, who was in his 70s, had been experiencing COVID-19-related symptoms at the Sandals Emerald Bay Resort in Great Exuma, the Royal Bahamas Police Force told NBC News and other media outlets. No foul play is suspected.

“As a result, he was tested. … He tested positive,” the police force said in a statement. “Subsequently, he self-quarantined” before his death.

“The body of the deceased is expected to be flown to New Providence, where an autopsy will be performed to determine the exact cause of death,” police told Reuters in a statement.

The Sandals Emerald Bay Resort hasn’t issued a public statement following the man’s death. A company representative didn’t respond by press time to a request by The Epoch Times for comment.

The Emerald Bay Resort is the same place where three Americans died from carbon monoxide exposure in May.

“We can officially confirm that all three of the victims died as a result of asphyxiation due to carbon monoxide poisoning,” Royal Bahamas police said in a June statement. “This matter remains under active investigation.”

Sandals stated that police confirmed it was an isolated incident in a building that housed guest rooms.

“Despite initial speculation, Bahamian authorities have concluded that the cause was an isolated incident in one standalone structure that housed two individual guest rooms and was in no way linked to the resort’s air conditioning system, food and beverage service, landscaping services, or foul play,” the Sandals resort said in a statement to media outlets at the time.

They were identified as Michael Phillips, 68, and Robbie Phillips, 65, a couple from Tennessee, and a Florida man, Vincent Chiarella, 64. Chiarella’s wife, Donnis, was airlifted to a Florida hospital after she was found unconscious at the resort.

Sandals has since stated that it’s reevaluating its safety protocols.

“Ensuring the safety and well-being of our guests and team members is and will always be paramount. It is for this reason that we have taken additional measures such as engaging environmental safety experts for a comprehensive review of all systems across the resort,” the company told media outlets earlier this year.

“In addition, CO detectors have now been placed in all guest rooms at Sandals Emerald Bay and although not mandated in any Caribbean destination where we operate, detectors will be installed in all guest rooms throughout the portfolio. Our entire team is keeping the families in our thoughts and prayers during this difficult time.”