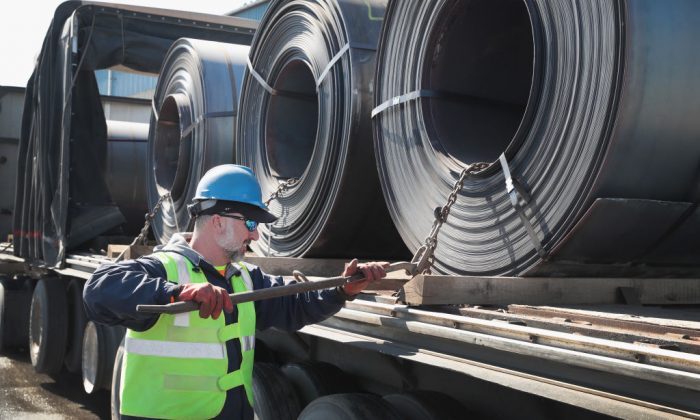 Steel is loaded onto a truck for shipping at the NLMK Indiana steel mill in Portage, Indiana, on March 15. The Trump administration imposed a 25 percent tariff on imported steel in March. (Scott Olson/Getty Images)
Trump Administration

President Donald Trump’s tariffs on steel imports have been a boon for domestic producers, helping revitalize an industry that has been in decline for decades. Following the levying of the tariffs, domestic producers have announced nine investments in recently shuttered plants. Meanwhile, U.S. aluminum companies have pledged to reopen production lines in Kentucky and Missouri.

“Our steel industry is coming back at a level that nobody thought possible. Factories are opening up all over,” President Donald Trump said at the second annual “Made in America” event on July 23.

U.S. Steel Corp. restarted two blast furnaces at its Granite City Works in Illinois. The Pittsburgh-based company said it would be fully operational and its steel production would nearly double by October.

“Despite objections over the Section 232 tariffs from foreign producers and governments, the tariffs are on track to accomplish what they were intended to do,” Commerce Secretary Wilbur Ross wrote in an op-ed for Cleveland.com.

“They are helping re-establish two vital industries for our national security.”

Imports of steel have been rising recently, making up nearly 33 percent of the U.S. steel market last year. The majority of steel producers have been taking losses since 2009, losing their ability to invest in new technologies and labor.

“We were being dumped on,” Trump said. “They were dumping all over this country.”

Steel dumping is a major problem worldwide. The United States and Europe accuse China of selling its steel at a loss so that other producers cannot compete.

Chinese producers, 70 percent of which are state-owned, lose at least $34 on every ton produced, according to estimates by the British trade association UK Steel.

Through state subsidies, China allows its manufacturers to produce far more steel than the global demand. And much of the excess steel ends up in the United States, where it is sold at rock-bottom prices, according to experts. Excess steel, therefore, creates a destructive ripple effect for domestic producers and workers.

Tens of thousands of American workers have faced layoffs and dozens of factories have been shut down since 2000 because of imports, according to the Alliance for American Manufacturing (AAM), a nonprofit organization formed by manufacturers and the United Steelworkers.

With the recent tariffs on imports, the steel industry is seeing some positive signs, said Scott Paul, president of AAM.

“There have been, in steel alone, about 3,500 to 4,000 workers that have been called back to the job, some after several years of unemployment,” he said.

The order books of domestic producers are busy, he added. “The relief is certainly having its intended effect for the steel industry, so far.”

In April last year, Trump ordered an investigation into whether imports of steel and aluminum posed a threat to national security. The U.S. Department of Commerce carried out the investigation under Section 232 of the Trade Expansion Act of 1962.

“To supply the United States military with advanced metals and U.S. industry with the steel and aluminum needed for critical infrastructure, the American manufacturers providing them must be commercially viable,” Ross stated. “These companies cannot stay in business only as military and critical infrastructure contractors; the mills and smelters cannot continue to operate at reduced capacity and survive.”

As a result of tariffs, U.S. steel prices rose sharply in March. Although the prices have come down in recent months, the ongoing uncertainty still creates a risk for industries that depend on steel including automotive, aerospace, manufacturing, and construction.

There’s certainly been a spike in steel prices, Paul said.

“I’m sure that’s been very frustrating for steel consumers … but I think it will settle down to more of a realistic market price,” he said.