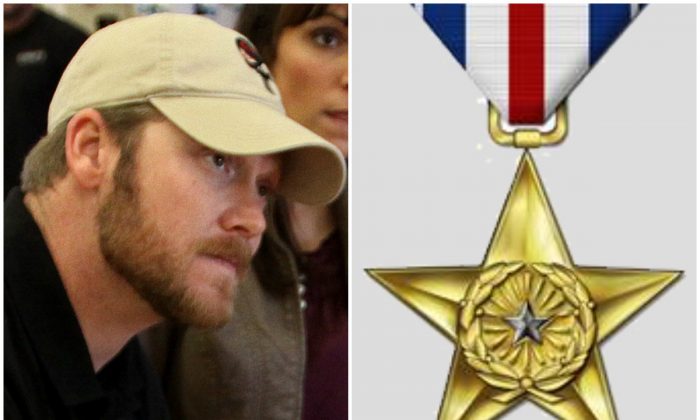 The deadliest sniper in U.S. military history, Chris Kyle, made a couple of claims too many about his outstanding record.

Except it wasn’t two and five. It was one and three, according to the Navy Personnel Command documents obtained by The Intercept.

The Intercept referred to multiple Navy officers, though none of them by name, who said that Kyle inflated the number of medals—though they didn’t question his extraordinary military accomplishments.

In 2004, after a year of his deployment in Iraq, he proved “exceptional tactical savvy” and his “field skill have set a new ‘high standard’ for SEAL Team THREE,” the record reads, recommending to: “PROMOTE HIM NOW!”

The second year earned him even stronger superlatives:

“Unsurpassed courage under fire while conducting sniper operations in support of [redacted] during the siege of Fallujah,” the record states.

“Exceptional leader. His personal conduct and performance in combat during the most intense urban combat ever experienced by NSW (Naval Special Warfare) personnel served as example to all!”

In 2006, the record called him “One of the most effective combat snipers in U.S. military history” and lauded him for “unmatched combat leadership and operation skill.”

“Single-handedly thwarted a large-scale coordinated attack on [redacted]. Killed [redacted] enemy fighters in a single operation in support of [redacted],” it reads.

That’s one Bronze Star more than what he listed in his best-selling autobiography—”American Sniper”—that was adapted into the highest-grossing war film of all time.

Was it that Kyle thought he had received all the medals listed on his discharge document?

Both the discharge certificate and his book list two Navy and Marine Corps Achievement Medals, while the documents obtained by The Intercept only show one.

We may never know as Kyle was shot dead in 2013 by mentally ill fellow veteran Eddie Ray Routh.

According to The Intercept, Kyle was told about the incorrect number of Silver Stars he credited to himself in his book.

The Navy Personnel Command stated the central records are considered the “authoritative” source, rather than the discharge certificate, which is “generated locally.”

Kyle should have also received each physical medal during an official ceremony, like in this photo:

On the other hand, based on his book, Kyle didn’t think much of his medals to begin with:

“Medals are all right, but they have a lot to do with politics, and I am not a fan of politics. All told, I would end my career as a SEAL with two Silver Stars and five Bronze Medals, all for valor. I’m proud of my service, but I sure as hell didn’t do it for any medal. They don’t make me any better or less than any other guy who served. Medals never tell the whole story. And like I said, in the end they’ve become more political than accurate. I’ve seen men who deserved a lot more and men who deserved a lot less rewarded by higher-ups negotiating for whatever public cause they were working on at the time. For all these reasons, they are not on display at my house or in my office.”

Even when it came to his much-touted sniper kill count, Kyle conveyed it with a rather lukewarm attitude in the book:

“The Navy credits me with more kills as a sniper than any other American service member, past or present. I guess that’s true. They go back and forth on what the number is. One week, it’s 160 (the “official” number as of this writing, for what that’s worth), then it’s way higher, then it’s somewhere in between. If you want a number, ask the Navy—you may even get the truth if you catch them on the right day.

People always want a number. Even if the Navy would let me, I’m not going to give one. I’m not a numbers guy.”