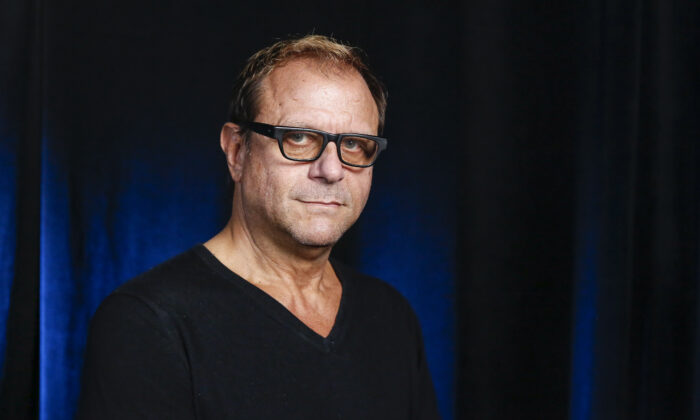 Dr. Michael Rectenwald, a former professor at New York University and author of “The Google Archipelago: The Digital Gulag and the Simulation of Freedom," in New York City, on Oct. 4, 2019. (Samira Bouaou/The Epoch Times)
Education

A new online education platform, American Scholars, launches on Sept. 10, promising courses on history, economics, law, and other subjects, aimed at helping parents and students to inoculate themselves against the woke ideology currently spreading through schools.

In addition to courses, the platform offers a discussion forum that will aid parents and students to discuss educational issues as well as organize their activities.

The platform marks itself as “pro-American,” rejecting the woke political zeitgeist moving through academia that is based on quasi-Marxist ideas such as Critical Race Theory (CRT). The virtual courses are led by established lecturers from American universities and cover areas salient to the current cultural climate.

The project was started by Matthew Pohl, a former admissions officer at the University of Pennsylvania. He saw traditional colleges as needlessly expensive as well as intellectually skewed by woke ideology. He founded American Scholars as an antidote to both, he previously told The Epoch Times.

For chief academic officer, Pohl picked Michael Rectenwald, a retired liberal studies professor at New York University. Rectenwald was de facto pushed out of his teaching job after he started criticizing the woke. He’s since become an authority on corporate socialism, a convergence of government and business interest in establishing a kind of totalitarian, socialist rule.

So far, he’s picked four lecturers to create courses for American Scholars. He’s also personally working on one that will cover CRT.

The subscription will start at $9 a month with the first several courses scheduled for release on September 10. The offerings should grow over time as the platform gains traction, Rectenwald told The Epoch Times via email.

He stressed the discussion forum is “an important piece” of the project, describing it as “a kind of non-leftist Reddit, if you will, where parents and other concerned citizens can discuss the challenges they face with K–12 and higher education, and where they can organize to fight back against Critical Race Theory, socialist indoctrination, and other pernicious ideologies.”

Morality Key to a Free Market

The first course on the platform is in economics and delves into the difference between free market and command economies. It was produced by Robin McCutcheon, associate professor of economics at Marshall University in West Virginia.

“The goal of my economics sessions is for students to self-reflect on what they see around them (in the world today) and decide for themselves how they would like to direct their own life,” she told The Epoch Times via email.

McCutcheon joined American Scholars because she saw it offering academic freedom which she couldn’t find at mainstream universities, she said.

She found universities “replete with people who have been trained and believe in socialist, progressive, leftist … all the words necessary to define an ideology of totalitarian, top-down power and control, where the elite hold absolute power/control and the rest-of-us are considered plebs/serfs.”

A society based on individual liberties and free commerce is superior to a socialist one, the professor said, but she felt the academic world has been hostile to dissenting ideas.

“Most of the elitist intelligentsia do not even know they are on the side of tyranny; they do not see it either in themselves or any colleague who espouses the same kind of philosophy,” she said.

“But when someone comes around that does not espouse their philosophy, not only do they recognize an enemy, they set out to destroy them.”

Through her course, she’d like to engage students in “a multi-step process of self-reflection combined with recognition of their own actions in the market.”

In contrast to a top-down system, McCutcheon sees the free-market economy as the expression of the morality of all its participants.

“Therefore, the type of market wherein participants hold a very high standard of moral code and ethics, will be the one with the best outcomes where the maximum amount of freedom is to be available for each participant. We call that kind of market the free-market. Honesty, kindness, hard work, quality of product or service, are some of the characteristics of people one sees in a free-market economy. A higher standard of living is possible for all who work to achieve it.”

A person subscribing to “lying and cheating” will have a hard time participating in voluntary exchange, in her view.

“It won’t take very long for your customers to realize what kind of person you are, and they will avoid doing business with you,” she said about people who lie and cheat.

She sees America slipping deeper and deeper into a command economy and considers morality as a key to moving back to a free-market one.

“When students can recognize that a free-market is the polar opposite to a controlled market, and that the underlying character of the people involved in each is the mechanism that defines the market, most people will need to look within themselves to see what kind of moral code they hold dear,” she said.

As her next step, she said she’d like to produce a course on personal finance.

American Scholars will offer a course on American history produced by Aharon Zorea, associate professor of history at the University of Wisconsin Colleges.

He sees the subject as “most often abused (or corrupted) by the influence of more political agendas,” he told The Epoch Times via email.

“We often hear about horror stories of students being told that our country is racist, sexist, and built on capitalist oppression—but we do not often have the counter arguments to explain why those stories are wrong, and why they misrepresent (and abuse) American history,” he said.

“Everyone will benefit from a systematic discussion of American history from its founding to the present day,” the history professor said. “We not only provide the broader context to explain some of the more notorious ‘myths’ about American history that are being taught in schools today, but we also provide the tools and methods to train our students to pursue their own research to combat these corrupted narratives head-on.”

He already has about 200 video segments planned with more on the drawing board.

“I start off with some basic historical themes, and provide some examples of how these themes are misinterpreted by current history curriculum. Then, as I lay that foundation, I will slowly fill in the gaps,” Zorea said.

In the future, he’d like to add courses on the History of Western Civilization, World History, Ancient Civilization, and “other special topics,” he said.

Another course on the Internet and the First Amendment is being produced by Lisa Nelson, associate professor of law at the University of Pittsburgh.

The course focuses on “the regulatory framework of the internet that has ironically given rise to censorship when we had originally hoped that it would produce an open and free internet,” she told The Epoch Times via email.

She’s been doing research on the topic of social media and censorship but felt frustrated about the difficulty in discussing it openly in academia.

“In a university setting it is becoming increasingly hard to talk about a variety of subjects because of the political divide that exists,” Nelson said.

Michael Nevradakis had been until recently a media and communications instructor at the American College of Greece. He’s producing a course on media history, “tracing the development of communication technologies through the ages and up to the present time, along with the controversies, fears, and hopes that accompanied the introduction of each of these technologies into society,” he told The Epoch Times via email.

“We live in a world that is not only increasingly media saturated, but also a world where more and more of our daily lives, activities, and the information and knowledge that we receive and are exposed to, are mediated through new technological platforms,” he said.

“These platforms, in turn, have amassed what some would say is an extreme amount of power, control, and influence over our public discourse. … In such a world, attaining a strong degree of media literacy is vital, as is gaining an understanding of how the media landscape operates and how we got to where we are today.”

Nevradakis, too, has a negative experience with the current climate at universities.

“I’ve personally dealt with a ridiculous set of obstacles at one of the academic institutions I’ve worked for previously; obstacles which seemed to have nothing to do with my academic or scholarly work or my professionalism,” he said, without going into further detail.

All the academics acknowledged that joining the project can make them targets of attacks.

“Honestly, this part of participating in American Scholars frightens me, but it also makes it important to do,” Nelson said.

“I lived for a time in the USSR and I saw how individuals were forced to quiet their criticism and conform to political pressures to keep their family and livelihoods safe. I never thought I would see the day when America is reaching this point and I believe we have to start challenging the constraints that are being put on us to conform and to be quiet.”

McCutcheon acknowledged facing disagreement as “a given.”

“Frankly, I don’t want all people to agree with what I say—I’d rather they use their logical thinking skills a little more to reason through ideas, rather than tear them apart because they don’t like them,” she said. “I would like more talk and less griping.”

She said she expects the backlash to backfire.

“I’m confident in my personal and professional foundations that anyone trying to attack me will find themselves exposed and vulnerable to criticism directed back at them,” she said.

Nevradakis expressed a similar sentiment, expecting personal attacks on himself to misfire.

“You can either prove that you are, in fact, as tolerant and open as you probably claim yourself to be, or you can prove your ‘opponents’ correct by engaging in a campaign of ostracization against someone who you apparently consider to be, for whatever reason, a threat,” he said. “The choice is yours, but on my end, I am used to such battles—and I am used to winning them.”

Zorea said he’s so far “still encouraged to develop personal research projects” at his university, but acknowledged pressure may mount if American Scholars receives substantial attention and he thus won’t be able to fly “under the radar” anymore.

“You can never predict the extent to which the dominant culture of radicalized activists might go to silence the viewpoints that they disagree with. Yet, we have to speak and teach as we are called to do,” he said.

“We will just have to see what comes of it. I am hoping that our parallel institutions will be able to sustain themselves without the dependency of the dominant social and cultural gatekeepers. That should help a great deal. If we receive support from our viewers, then we really cannot be ‘canceled.'”