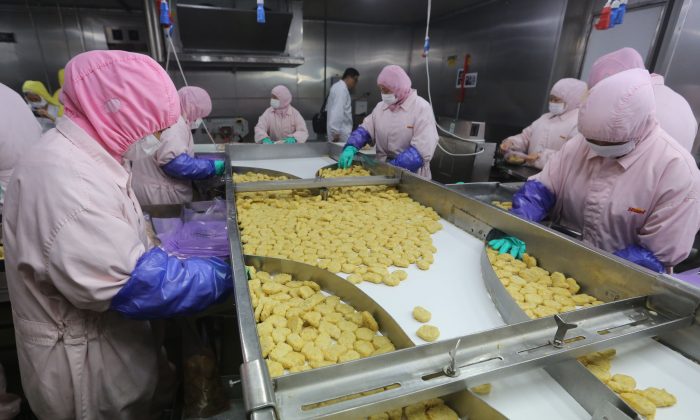 Five major American fast food retailers have cancelled all orders from a Chinese supplier after learning from a TV report that the supplier was using rotten meat in fast-food products.

According to the TV report, the tainted products were “prioritized for use in China,” but on Monday McDonald’s announced that Chicken McNuggets sold in Japan had also been affected.

STV reporters made two months of undercover visits to the Husi factory, pretending to be employees and shooting footage using hidden cameras.

According to the report, 18 tons of chicken skin and chicken breasts whose use by date had expired two weeks previously were mixed into chicken McNuggets on June 18. Another 10 tons of mini beef steaks that had expired over seven months ago were tagged with new expiration dates, after being processed to get rid of the smell from the rotting meat.

Some of the meat looked green and stank, the report said.

“One doesn’t die from eating expired meat,” a worker at the factory joked to a reporter.

The factory also mixed rotten meat and substandard meat with fresh meat. A worker at the production line told the undercover reporter that they normally mix in about five percent of unfit meat.

Although McDonald’s regularly visits and inspects the Husi Food production line, the factory deceived the inspectors. The STV report showed that during a visit of McDonald’s inspectors on May 21, all the substandard meat product contained in blue bags were put away, and then were taken out again to mix in food after the inspectors were gone.

“They won’t let us add in those. They’ll cancel orders if they know it.” A worker at the factory said.

Husi also kept two sets of records, one for use inside the company and a fake set to show outside inspectors, the report said. The fake records covered up the use of expired food.

The Shanghai Municipal Food and Drug Administration has shut Husi Foods, sealed all its food products, and ordered the seizure of all products supplied by the company.

Shanghai Husi Food is the China-based subsidiary of the OSI Group, an Illinois-based food processing conglomerate, one of the world’s biggest meat and vegetable processing groups. OSI Group is an important global partner of McDonald’s and Yum! Brands.

The food scandal has inspired a lot of discussion on China’s Internet.

Many netizens expressed their fear of eating fast food again. Some other netizens said the authorities in charge of the food safety inspection should be held responsible.

“I think McDonald’s and KFC are also victims. The report says they were cheated by the fake data every time they inspected… Shouldn’t the authorities be held responsible?” wrote a netizen named “Yaba” on Weibo, a popular microblog in China.

Some netizens used this scandal to satirize notorious food scandals that have been exposed in the past in mainland China.

“McDonald’s and KFC are truly the conscience of enterprises in mainland China because they just used expired beef but not rat’s meat, and just used food oil but not gutter oil,” wrote netizen “Heise Liming1949” on Weibo.

The state-run Beijing News reported last May that police shut down dozens of illegal meat producing groups in China that mixed rat, fox, and mink meat with spices to produce fake lamb meat. Some companies also made meat products out of the meat of animals who had died from disease, causing at least one death and poisoning a number of people, the Beijing News said.