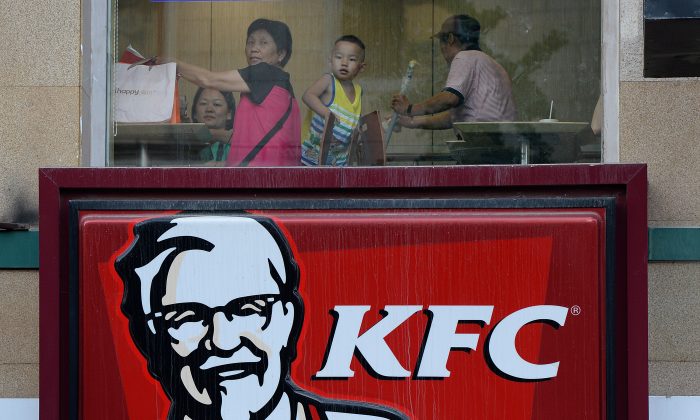 Kentucky Fried Chicken (KFC) has made a restaurant enshrining a soldier who is used as a model of communist behavior. The restaurant was opened in Hunan, China on March 4, according to Chinanews.com.

The soldier, known as Lei Feng, has been used since the 1960’s as an icon of dedication to the Chinese Communist Party (CCP) to indoctrinate people.

The KFC restaurant was opened on the memorial day for Lei, who died in 1962 at the age of 21. The city, Changsha, is Lei Feng’s hometown.

Customers are greeted with cartoon versions of Lei pasted to the glass windows, in the “Spirit of Lei” restaurant. There is even a statue of Lei near the entrance, designed in a way to look appealing.

Walls are adorned with quotes attributed to Lei as well.

Some scholars have called into question the stories surrounding Lei.

In China, Lei is used as a propaganda tool to describe selfless dedication to the Chinese Communist Party. He did not become popular until after his death, when he was used as a model for obedience to the Party.

Some scholars have pointed out logical inconsistencies from the proposed life of Lei. Professional grade photographs of Lei were taken before his death, though he was supposedly completely unknown, according to the New York Times. However, there exist hundred of photos of his daily mundane good deeds.

One such photo was of Lei studying Mao Zedong’s “Little Red Book” by flashlight. The NYT cited Shanghai based designer Liu Yi, who mentioned that in the photo, the room is fully lit and the flashlight is not turned on.

Foreign companies in China must follow along with the CCP’s demands on propaganda.

The Disney Resort in Shanghai has regular political seminars about Party doctrine during working house, according to the Wall Street Journal.

Both European and American companies have been pressured by the Party branch in their companies, according to the WSJ. Some companies were forced to hire more CCP members. Another company was forced to move its branch to an area where authorities were promoting investment.

The CCP attempts to influence American companies in other ways. Major news companies have partnered with Chinese media, or hosted propaganda ads from the CCP.

Concern was raised in Dec. 2018 when the Associated Press partnered with Xinhua, the major state-run news outlet in mainland China.

An insert in an Iowa newspaper during the midterm elections attempted to swing favor away from President Donald Trump. This ad was sponsored by the CCP in an attempt to sway U.S. public opinion.