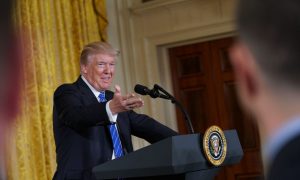 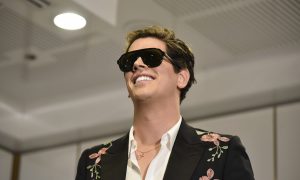 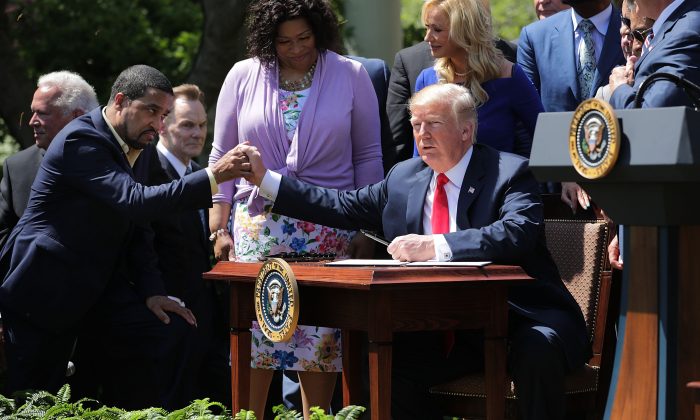 President Donald Trump shakes hands with Pastor Darrell Scott, co-founder of the New Spirit Revival Center, before Trump signs an executive order during an event in the Rose Garden to mark the National Day of Prayer at the White House on May 3, 2018. (Chip Somodevilla/Getty Images)
Viewpoints

During the election cycle of 2016, there were several pleasant surprises in the arena of race relations. One was seeing interviews with Pastor Darrell Scott (a pastor who happens to be black), who discussed how and why he had lobbied Donald Trump to run for president before he stepped down the escalator to declare his candidacy.

Scott, a major Trump supporter in the African-American community, said, “Trump is a white version of me.” He saw a vision of Trump being able to rally a genuinely multi-racial America. His support has never wavered.

Another surprise was when Trump, at rallies in the Midwest, called on the black community to consider voting for him. He told the community that Democrats only paid attention to them every four years when they needed their votes. He said Democrats never did much to help them in return for their votes, and nothing substantially changed for African-Americans during the Obama years. Race relations had actually gone backward during Obama’s tenure. Finally, Trump threw out this challenge: “What do you have to lose?”

It was a stunning indictment of the shallow Democratic Party policies, and a shocking plea for change. Race relations had badly deteriorated during the Obama years, and Trump was asking for a change in course.

Of course, our overly hyperbolic Democratic Party and their leftist/media vanguard were waist-deep into their typical election smearing campaign. Trump, as with all Republicans, was a racist. Pay no attention to the fact he had often been lauded by the left for his track record in race relations prior to running as a Republican. Heck, Jesse Jackson once gave him an award for his racial awareness.

But now, by virtue of him declaring as a Republican, he turned into a racist overnight. It was hard to say how that familiar Democrat smear would play with a man who had successfully worked with managers of all races in the past. They had succeeded with this racist smearing before, so watching this with Trump would be like watching a heavyweight prizefight. This was going to get interesting.

As it turned out, he received a greater percentage of African-American votes (as well as Hispanics), than had the overly apologetic Mitt Romney in the general election of 2012. That surprised a lot of people who did exit poll analysis. Knowing Trump’s actual past working with people of color, it should not have been a surprise. The pandering and the defensiveness of the GOP establishment have always appeared as silly, and as the wrong approach.

A personal anecdote: Early in the summer of 2018, I had a discussion about race with a young woman, who happened to be black. It was a spirited discussion, but one where our different opinions were discussed with civility, candor, zeal, and respect. I can’t say that about many discussions I have had with liberals, but this was a good one.

One main part of our discussion was the extent of the racism that was real in white people, particularly those on the center-right. I suggested the racism always proclaimed by the left was simply not true. She didn’t agree. Yet she listened and continued the discussion.

That clearly startled her.

I also mentioned I thought that Trump would receive close to 20 percent of the African-American vote in 2020, if not more. Which she promptly said couldn’t be true. She was convinced that would never happen. She gave me a book to read, I gave her one, and we parted as friends. We don’t live in the same area, I have not seen her since, but when I see her again, we will remain respect-filled adversaries, although she might change her mind someday.

As the months have gone by, we have watched black confidence in Trump become more positive for multiple reasons.

One: The economy has been doing extraordinarily well. Coincidentally, unemployment numbers are at historic lows. The lowest unemployment number of blacks and Hispanics is now a signature of this economic recovery. It has been for the better part of a year.

Let me suggest that even though our wonderful mainstream media has virtually blacked out reporting this fact, it has become known by the people it has affected. Trump’s pronouncements, and his tweets, did their work. Most people know the economy is doing well, and it’s a shared boon for all Americans.

Two: The Kanye West effect. West has had a long friendship with Donald Trump. They had a surprise visit during the transitional time period. He and his wife Kim Kardashian West have both visited him this past year, lobbying for prison reform. And then he came to that openly public Oval Office meeting back in October. West’s friendship with Trump was seen by all races across America.

Last, but not least is the phenomenon of young, outspoken, extremely smart, black conservatives, including the talented Candace Owens. The Young Black Leadership Summit in October this year was a major success.

This group is persuasive, tough, and has a desire to bring back color blindness not seen in a long time. They are determined to change what they see as race relations going the wrong way.

Their White House meeting was effective, and successful for all parties. Their word is now getting out to the black community: You don’t have to be a Democrat, and you don’t have to stay as their vote slaves.

A movement in the black community has been happening since Trump won. And quietly, there has been a little-known shift in the polls. He won 8 percent of the black vote in 2016. In early October 2017, his approval rate among black voters had climbed to 23 percent, In early October 2018, it had reached 35 percent. Rasmussen polling on Oct. 29 showed a 40 percent approval rating for Trump. Yes, 40 percent.

A game-changer. If this holds, if even 20 percent of the black community votes for Trump, it will be game over early for the 2020 election. And if the Republicans are smart, it could mean the beginning of ending the insanity and ugliness known as identity politics. It could prove to be the end of the Democratic Party stranglehold on the black vote.

Which would be a wonderful thing to happen in America.

Meaning, the Democratic Party might have to change. They would have to reform themselves and their petty, bitter messaging on race to remain relevant. Which would be a welcome occurrence for a country reeling from the effects of the scorched-earth politics coming from the party of the left over the years.

My take: The change continues to happen. Right now. Trump is beginning to succeed with his challenge of early 2016. His question, “What do you have to lose” is now becoming a flood of affirmation: a flood of change. Spearheaded by black conservatives, it’s happening.

I have said before that one of Trump’s greatest achievements is the driving of our mainstream leftist media to an insanity previously unknown to mankind.

If this trend in the black community holds, he’ll become known as the president who began the healing of our racial divide. He will aid in making race relations great, and that would become his finest achievement. Martin Luther King Jr.’s awesome dream, that we would be judged by the content of our character rather than the color of our skin, could finally happen.

My young friend, and an entire generation of blacks can walk through that great door of American opportunity. They will want America to be great again.