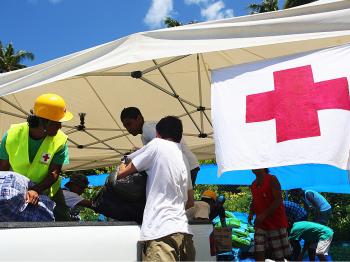 By Vasudha Samanthula
Print
The American Red Cross, as part of global Red Cross relief is providing financial, logistical and material support to victims of the recent disasters which hit nations in Southeast Asia and the Pacific islands.

“We’re working closely with the countries that have been hit by these terrible disasters to make sure they have the resources they need—most importantly, clean water, food and shelter,” said David Meltzer, Senior Vice President of International Services at the American Red Cross in a press release.

On September 30 an 8.0 magnitude earthquake in the Pacific Ocean caused a destructive tsunami that struck American Samoa, Samoa, and Tonga. The American Red Cross has taken the lead in responding to the disaster in American Samoa. The tsunami destroyed thousands of villages and displaced thousands of local residents. In addition to providing food, water and needed supplies, the Red Cross has also dispatched volunteers to the island.

The American Red Cross Society is contributing $100,000 to assist the relief efforts of local Red Cross societies in Samoa and Tonga.

The American Red Cross is working closely with other Red Cross organizations in Southeast Asia to help cope with the disasters. Deadly earthquakes in Indonesia have destroyed the island of Sumatra and claimed one thousand lives. 800-thousand people have been affected.

The American Red Cross is supporting the efforts of the Indonesian Red Cross, and in addition to the initial aid of $100,000, another $400,000 was added to assist in their efforts to procure and distribute relief supplies and clean water.

Typhoon Ketsana ravaged across the Philippines, Vietnam, Cambodia and Laos last month, causing the worst flooding. American Red Cross contributed an initial $100,000 worth of supplies to the Philippines from the Red Cross warehouse in Kuala Lumpur, Malaysia and $50,000 cash to Vietnam. This week, an additional $400,000 was made available to the Philippines.

The global Red Cross network, with 186 national Red Cross and Red Crescent societies, is the world's largest humanitarian network. A total of 97 million volunteers and three regional warehouses of relief supplies located around the world enable a quick response when disasters strike.