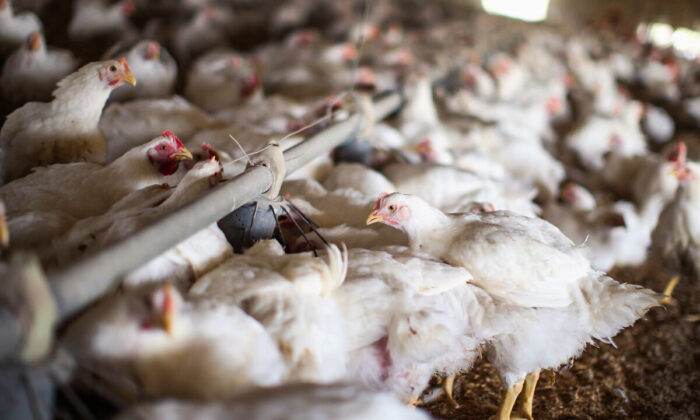 Chickens gather around a feeder at a farm in Osage, Iowa, on Aug. 9, 2014. (Scott Olson/Getty Images)
Economy

Cases of H5N1 avian influenza have been detected in Indiana, Virginia, and Kentucky, posing a likely threat to the United States’ domestic supply of chicken and turkey this winter.

On Monday, the CDC announced detections of highly pathogenic avian influenza (HPAI) viruses in domesticated birds. This outbreak was first documented in Indiana, but has since spread eastward to Kentucky and Virginia, if not elsewhere.

Altogether, over 300,000 birds are already affected, directly or indirectly, by the proliferation of this virus. At one Tyson Foods farm in Kentucky alone, where avian flu was detected, there are an estimated 246,000 chickens. It is unclear how many of these will be euthanized to contain the virus.

Last week, over 30,000 turkeys were euthanized at a farm in Indiana after the H5N1 virus was detected there, for the first time in the United States since 2020.

The timing of the new avian flu wave is especially inconvenient, with the industry already struggling to meet demand amid supply chain issues. The winter of 2020 was particularly brutal, causing a shortage in the domestic supply of poultry livestock. This circumstantial scarcity, combined with the highest levels of inflation in 40 years, has resulted in record-high chicken prices, with chicken meat already selling for an average of $1.62 per pound in January (before the detection of the current outbreak).

Fortunately for consumers, these avian flus are rarely transmissible to humans, and there is no evidence that the virus can spread to humans through the consumption of infected poultry.

“Human infections with HPAI A(H5) bird flu viruses are rare but can occur, usually after close contact with infected birds,” the CDC said in a statement. “No human infections with highly pathogenic avian influenza A viruses have been detected to date in the United States.”

However, depending on the eventual scale of the outbreak and subsequent euthanizations, it could nonetheless impose a burden on consumers’ wallets, adding to the already-onerous costs of poultry.

Nonetheless, several countries such as Mexico have halted imports of American poultry in response to the outbreak. However, these restrictions may be short-lived, as the supply chain crunch for poultry is being felt around the globe, and HPAI viruses have sporadically emerged throughout the world in the past two years.