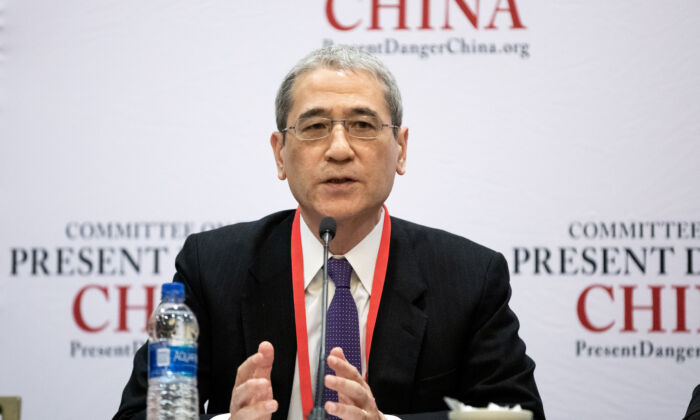 Political commentator and China analyst Gordon Chang speaks during a discussion hosted by The Committee on the Present Danger: China, at the CPAC convention in National Harbor, Md., on Feb. 27, 2020. (Samira Bouaou/The Epoch Times)
US-China Relations

The Chinese Communist Party is working to subvert the United States and the American people should step up to fight back against such threats, according to China analyst and author Gordon Chang.

“China exploits every point of contact with us to overthrow our government. They’re overwhelming us: law enforcement is overwhelmed, academia is overwhelmed, everyone is overwhelmed,” Chang said at an event hosted by the New York Young Republican Club on March 15.

To advance its interests, the Chinese regime has courted political elites and other U.S. business entities in the United States, Chang said

The expert pointed to the well-publicized case concerning a suspected Chinese spy who had links to Rep. Eric Swalwell (D-Calif), when he was still a local city council member.

In December 2020, an Axios report revealed that the alleged Chinese spy, Christine Fang, had built up an extensive network of contacts with up-and-coming politicians in the San Francisco Bay Area, including Swalwell. Swalwell reportedly cut ties with her after FBI investigators gave him a “defensive briefing.” Yet, given his position as a member of the House Intelligence Committee, a number of House Republicans still raised serious concerns over the risk of the leak of classified intelligence to the CCP.

Chang stressed that the American people are in a good position to repel threats from Beijing.

He took the probe into the origins of the COVID-19 pandemic as an example. In May 2020 the Biden State Department quietly ended an inquiry launched by then-Secretary of State Mike Pompeo to investigate whether the virus had stemmed from a leak out of the Wuhan Institute of Virology.

According to the expert, the decision sparked “an immediate outrage just across the United States”.

Consequently, Chang said, “by the afternoon, Biden had to charge the intelligence community with this investigation of the origins to come back in 90 days.”

Even though the probe ultimately did not reach a conclusive finding, Chang insisted that American individuals should take more action to push back against harms from China.

He suggested several measures that ordinary Americans can take. “We can tell our brokers to sell Chinese stocks and to sell mutual funds that hold Chinese stocks ….We can demand our candidates to talk about China,” he said.

The expert underlined that each American should raise awareness about this issue among friends and neighbors, describing this process as a “person by person battle.”

“What we’ve got to do is organize ourselves because we have to take back our country; we’re going to lose it,” he said.

This includes maintaining pressure on the Biden administration to enact tough policies against the Chinese regime.

“It is our country and we’re going to lose it unless we actually start making sure that people like Biden start defending ourselves,” Gordon said.