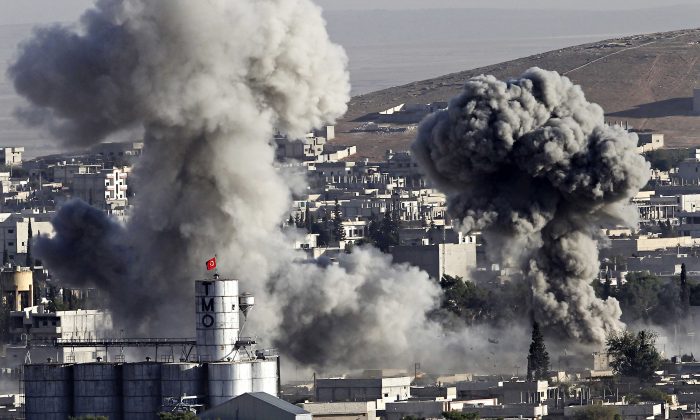 Heavy smoke from a fire caused by a strike rises in Kobani, Syria as fighting intensified between Syrian Kurds and the ISIS terrorists, as seen from Mursitpinar in the outskirts of Suruc, at the Turkey-Syria border, Oct. 10, 2014. (Gokhan Sahin/Getty Images)
US News

An American mother from Kansas pleaded guilty in a U.S. federal district court on Tuesday to organizing and leading an all-female military battalion for the ISIS terrorist group in Syria.

Allison Fluke-Ekren, a mother of five and former school teacher, admitted to training around 100 women and girls to support ISIS activities. She also plotted to carry out a terrorist attack on U.S. soil, the U.S. Department of Justice (DOJ) announced, citing court documents.

After spending years abroad supporting the ISIS terrorist group, Fluke-Ekren was transported in custody to the United States after being arrested in Syria on Jan. 28.

Fluke-Ekren first fronted a U.S. court on Jan. 31, where she entered no plea and was ordered held without bail until a detention hearing in February.

According to the DOJ, the Kansas mom, whose parents and adult children want nothing to do with her, left America for Egypt in 2008 to live with her second husband, a now-deceased former member of the Ansar al-Sharia terrorist group.

For the eight years starting from approximately September 2011, she spent time in Syria, Libya, and Iraq engaging in “terrorism-related activities,” ultimately becoming the leader of Khatiba Nusaybah, the all-female ISIS battalion.

As its leader and organizer, she trained women and young girls—some as young as 10 or 11—in the use of automatic firing AK-47 assault rifles, grenades, and suicide belts packed with explosives. She also taught religious classes, martial arts, medical training, and courses in driving vehicles used as explosives.

In its release, the DOJ announced that Fluke-Akren assisted her husband in reviewing and summarizing the contents of U.S. government documents stolen in the aftermath of the Sept. 11, 2012, terrorist attack on the U.S. Special Mission and CIA Annex in Benghazi, Libya.

Around mid-2014, Fluke-Ekren told a witness in Syria that she desired to carry out an attack in the United States.

The eyewitness said the former U.S. school teacher discussed ideas about using explosives to attack a Midwest college. She also plotted to carry out a bombing at a U.S. shopping mall.

“To conduct the attack, Fluke-Ekren explained that she could go to a shopping mall in the United States, park a vehicle full of explosives in the basement or parking garage level of the structure, and detonate the explosives in the vehicle with a cell phone triggering device,” according to the DOJ’s release.

According to the witness, Fluke-Ekren considered any attack that did not kill a large number of individuals to be a waste of resources and that she wished attacks taking place outside the United States had occurred on U.S. soil instead.