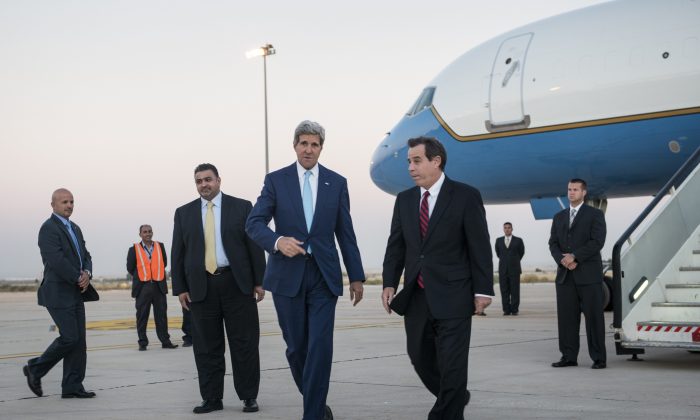 President Barack Obama said the al-Qaeda-inspired terrorists who have captured territory in Iraq could destabilize the region and threaten the United States. But the insurgency is just one of an array of threats the United States must guard against, Obama said in an interview recorded Friday and aired Sunday on CBS’s “Face the Nation.”

Obama pointed to the group Boko Haram in north Africa and al-Qaeda groups in Yemen, which also demands the attention of the United States and its partners. But the president said that American troops cannot go everywhere.

“What we can’t do is think that we’re just going to play whack-a-mole and send U.S. troops occupying various countries wherever these organizations pop up,” Obama said. “We’re going to have to have a more focused, more targeted strategy, and we’re going to have to partner and train local law enforcement and military to do their jobs as well.”

Groups and individuals that normally support Obama struck a note of caution.

“Launching another military intervention in Iraq would only throw more fuel on a fire that is raging. Even worse, it would once again risk American lives in a fight that is not ours and that we cannot win,” wrote Matthew Hoh, in a petition for MoveOn.org, a liberal political group.

“I think that you have to be careful sending special forces because that’s a number that has a tendency to grow,” said House Democratic leader Nancy Pelosi of California, one of Obama’s staunchest supporters.

“We’re going to have to be vigilant generally. Right now the problem with ISIS is the fact that they’re destabilizing the country,” Obama said, using a common acronym for the group. “That could spill over into some of our allies like Jordan.

Secretary of State John Kerry, who is in the Middle East, said the Islamic State of Iraq and the Levant has become a threat to the entire Mideast, and perhaps beyond.

“This is a critical moment,” Kerry said after meeting with Egyptian President Abdel-Fattah el-Sissi.

Like the president, Kerry said the group is a “threat not only to Iraq, but to the entire region.”

“There is no safety margin whatsoever in funding a group like ISIL, and we particularly discourage individuals in the region who may have been sending money through some illicit charity or through various back-channel initiatives under the guise this is for the general welfare and benefit for people who have been displaced, but then that money finds its way into the hands of terrorists,” Kerry said.

About 23,000 people have been driven from their homes in Iraq, according to the United Nations. Some are staying in unfinished houses, in parks, sports fields, and in old military bases. Fuel shortages are impacting transportation and services.

According to Kenneth Pollack, senior fellow at the Brookings Institution, one big question is whether Iraq asked for and wants the military advisers America has sent. If they did not ask for them, what kind of access will they have? What kind of authority will they have over Iraqi troops? Another is what military goal and strategy are the advisers meant to help the Iraqis achieve? Are they to help the al-Maliki government retake all of Iraq?

Pollack, writing an analysis for Brookings, acknowledged that it seems to be “a small, but smart step to take in the current, exceptionally challenging circumstances.” Yet because it is so small, its impact will be limited.