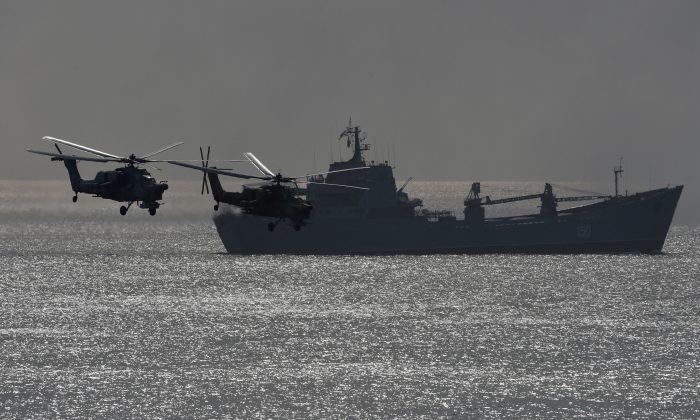 A stock photo of a Russian warship. (VASILY MAXIMOV/AFP/Getty Images)
US

Officials say an American merchant ship was harassed by the Russian military in an incident last month.

A Russian naval vessel and helicopters approached the M/V Green Ridge, which was carrying U.S. military equipment for a joint American-NATO drill, according to Defense News, citing an internal report of the incident.

An unnamed ship official told Defense News the incident was “intense and threatening.” It took place as the vessel was bound for a port in Lithuania.

The U.S. Transportation Command said it’s aware of the alleged incident, noting that the merchant vessel was carrying equipment for Exercise Saber Strike 2017.

“We are aware of an alleged situation on May 25, involving a contracted, U.S.-flagged vessel, and Russian military ship and aircraft,” the agency said in a statement. “The commercial ship was bound for Lithuania, and was contracted by the U.S. Department of Defense to transport equipment for an upcoming planned exercise.”

“US aircraft and ships routinely interact with other nations, including Russia, in international seas and waters, and most interactions are safe and professional,” it added to Business Insider. “While under DoD contract, commercial shippers are expected to observe these same maritime laws. We expect Russian vessels and aircraft to operate safely and professionally as well.”

According to the reports, there were no injuries, and the ship was not damaged.

Russian officials have not yet commented on the matter. Defense News said it reached out to the embassy, but no to avail.

Brooke Grehan, the chief operating officer at Central Gulf Lines, which operates the M/V Green Ridge, issued a statement on the alleged harassment, saying there is “often interaction between vessels, including naval vessels” in the Baltic Sea.

“Normally the communication between vessels is professional. However there are occasions when it is not. Our crew responded professionally and there was no delay as a result of incident,” she added.