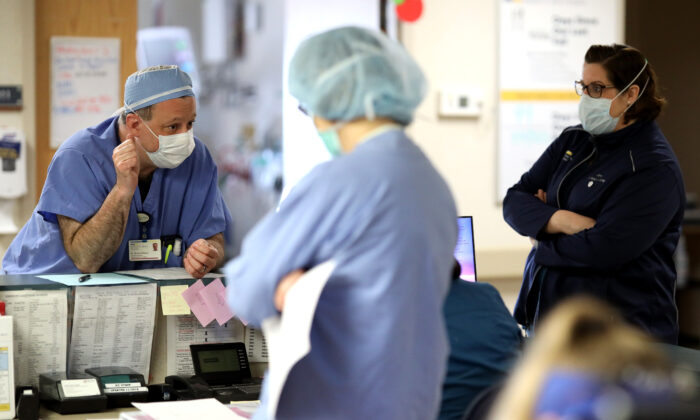 Doctors and nurses confer in a hospital in Leonardtown, Md., on April 8, 2020. (Win McNamee/Getty Images)
US News

The American Medical Association (AMA), the largest national organization representing physicians and medical students in the United States, says it will set aside its long-held concept of meritocracy in favor of “racial justice” and “health equity.”

In an 86-page strategic plan released May 11, the AMA set out a three-year road map detailing how the advocacy group will use its influence to dismantle “structural and institutional racism” and advance “social and racial justice” in America’s health care system.

According to its plan, the AMA will be following a host of strategies, including implementing “racial and social justice” throughout the AMA enterprise culture, systems, policies, and practices; expanding medical education to include critical race theory; and pushing toward “racial healing, reconciliation, and transformation” regarding the organization’s own “racially discriminatory” past.

The AMA also makes clear that it now rejects the concepts of “equality” and “meritocracy,” which have been goals in the fields of medical science and medical care.

“Equality as a process means providing the same amounts and types of resources across populations,” the association said. “Seeking to treat everyone the ‘same,’ ignores the historical legacy of disinvestment and deprivation through historical policy and practice of marginalizing and minoritizing communities.”

While the AMA doesn’t run America’s health care system, it holds tremendous influence over medical schools and teaching hospitals that train physicians and other health professionals. Those institutes, the AMA says, must reject meritocracy, which it describes as a harmful narrative that “ignores the inequitably distributed social, structural and political resources.”

“The commonly held narrative of meritocracy is the idea that people are successful purely because of their individual effort,” it states. “Medical education has largely been based on such flawed meritocratic ideals, and it will take intentional focus and effort to recognize, review and revise this deeply flawed interpretation.”

Instead, the AMA suggests, medical schools should incorporate into their programs critical race theory, an offshoot of Marxism that views society through the lens of a power struggle between the race of oppressors and that of the oppressed. As a result, according to the theory, all long-established institutions of Western society are considered to be tools of racial oppression.

In a statement that accompanied the plan, AMA President Gerald Harmon said he is “fully committed to this cause” and called on the medical community to join the effort.

“We believe that by leveraging the power of our membership, our influence, and our reach we can help bring real and lasting change to medicine,” he said.

The controversy around critical race theory in U.S. institutions gained more attention in 2020, when President Donald Trump banned the use of training materials based on “divisive and harmful sex and race-based ideologies” in federal workplaces. President Joe Biden rescinded the order, instead issuing an order stating that his administration would pursue “a comprehensive approach to advancing equity for all.”