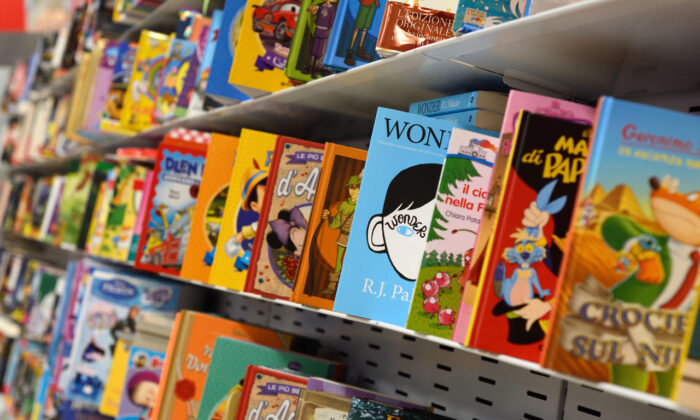 A photo of a shelf with a variety of children's books, taken on Feb. 9, 2017. (Shutterstock)
Social Issues

Librarians should “sneak” pro-LGBT messages into conservative communities, according to a post on the American Library Association’s (ALA) website.

“Do you work for a library in a small, rural, conservative community? Are you a frontline staff member there, with no managerial or administrative authority? Do you wish you could do more to make your library more inclusive to the LGBTQIA++ community, but meet with resistance?” the post about LGBT book month reads. “I hope it’s not just me!”

The post’s writer, Tess Goldwasser, goes on to advise librarians without administrative authority on how to put pro-LGBT messaging into libraries.

Goldwasser, a Maryland librarian, originally was named as the author of the post, but the ALA removed her name in 2019.

The ALA is the world’s largest library association. It has more than 58,000 members, including librarians, library workers, library trustees, and others.

“Chances are kids and families won’t even notice, but for that same-sex family or gender-nonconforming child who does, it will really mean a lot to them to know their librarian has their back,” wrote Goldwasser.

If a library resists pro-LGBT programming, librarians should ask every year for a pro-LGBT book display, Goldwasser wrote. Eventually, the library might agree.

If the management doesn’t want to run its own pro-LGBT programs, librarians should invite LGBT groups to hold meetings in the library’s public meeting spaces, she added.

“Reach out to groups like your local PFLAG chapter, or local schools’ LGBT student groups, and let them know that they can hold meetings and host programs at your library,” Goldwasser suggested.

Librarians should go around management to acquisition specialists to request award-winning pro-LGBT books, she said.

If someone challenges the addition of pro-LGBT books, librarians should “firmly defend” their choices, Goldwasser advised.

“Be ready to listen to the complaint, and respond in a calm matter stating that your library purchases items for all the members of your community, and that you’d be happy to help them find other items more to their tastes,” she wrote.

Most of the time people who get this response will move on, she added.

Other parts of the ALA’s website also encourage the addition of pro-LGBT books to libraries. One appeal for donations calls opposition to these books “censorship.”

“Never before has ALA’s Office for Intellectual Freedom tallied more censorship attempts, nor have libraries experienced such assaults on the freedom to read,” the site reads.

“Across the country, people are attempting to ban books that address the voices and lived experiences of black, indigenous, and people of color, and LGBTQIA+ individuals.”

“School libraries are particularly important; teenagers question their sexuality and identity and need a welcoming place; children and teens need to see themselves represented in books at school as well as at the public library,” the toolkit reads.

The same toolkit recommended that librarians provide anonymity to people questioning their sexuality.

“People who are “in the closet” or questioning often need information resources the most, so it is essential to provide safe and anonymous access, without judgment,” the toolkit’s guidelines read.

Good libraries should have LGBT material designed for all ages, the toolkit suggests.

“A good library collection will include fiction and non-fiction, informative and entertaining materials, graphic novels, audio books, videos, etc., for GLBT library users of all ages,” the toolkit reads.