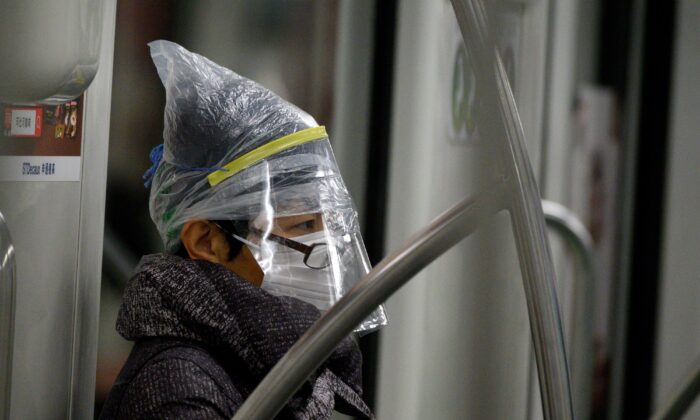 A subway passenger wears a facemask among other protective items in Shanghai on Feb. 12, 2020. (NOEL CELIS/AFP via Getty Images)
AMERICA

American Hospitalized With Coronavirus Says Quarantine ‘Messes With Your Mind’

An American who was hospitalized with COVID-19 in Japan after testing positive said that the medical isolation has started to take a toll on her mental health.

“It messes with your mind. I never really felt so alone,” Rebecca Frasure said in an interview on Feb. 18.

After being diagnosed with COVID-19, caused by a novel coronavirus that is believed to have originated in central China, Frasure said she hasn’t had physical contact with anyone in 12 days other than someone taking her blood pressure or checking her lungs.

“I don’t know if anybody else has experienced that. Clearly, people who are in the hospital too are probably experiencing that to a degree, but that is something that plays with your emotions,” Frasure told CNN. “To not be able to touch somebody, to hug somebody, to have that personal interaction with another human being, and to not have that interaction with your spouse, it’s kind of devastating.”

On Feb. 16, the U.S. Department of State evacuated hundreds of American citizens from the Diamond Princess cruise ship, which has been held in quarantine since early February after an elderly man tested positive for the virus. The ship has experienced an extraordinarily high transmission rate, infecting at least 542 people out of about 3,700 passengers and crew, according to the latest update from Japanese health officials.

Frasure, meanwhile, told the network that she hasn’t experienced any COVID-19 symptoms but had a “slight cough” and “very slightly elevated fever.” Her cough is now “essentially gone” and has no other symptoms. To be cleared, however, Frasure said she has to test negative on two consecutive days.

Outside of mainland China, the Diamond Princess is the single largest cluster of known COVID-19 cases in the world. No other countries and territories have reached 100 cases.

Americans who were evacuated from the ship are now being held in another quarantine on military bases, according to a statement from the State Department on Feb. 16. About a dozen evacuees and their spouses who were deemed “high-risk” were taken to the University of Nebraska Medical Center in Omaha for isolation, said state officials in a Feb. 17 press conference.

Christopher Kratochvil, executive director of clinical research for the Global Center for Health Security at the university, said a total of 13 people were taken to Omaha and described them as “high-risk patients.”

“Around 2 or 3 this morning, we were asked to bring individuals who had tested positive or had a high likelihood of testing positive, based on the symptoms they were showing,” Kratochvil said in the news conference. He confirmed that 13 Americans are being held in isolation there, adding that one patient was taken to a special containment unit with symptoms of an undisclosed chronic condition, said Shelly Schwedhelm, the head of Nebraska Medicine’s emergency department.