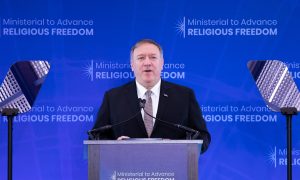 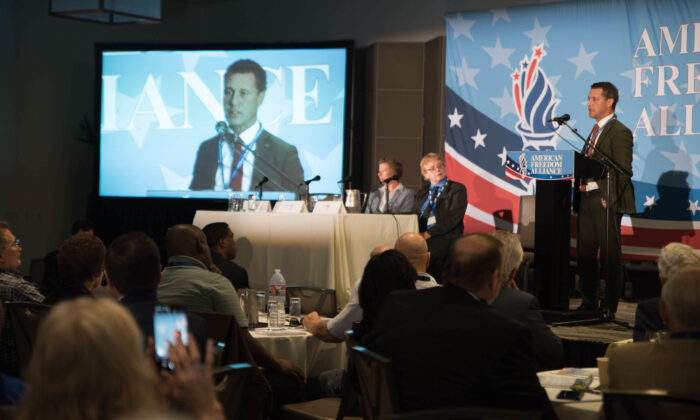 The American Freedom Alliance (AFA), a non-profit organization aimed at promoting, defending and upholding western values and ideals, hosted an international conference at the Luxe Hotel in the Brentwood neighborhood of Los Angeles on Oct. 5 and 6.

The event saw a turnout of roughly 150 on the first day and about 180 on the second day. The organization hosted a number of elected leaders, heads of think tanks, authors and representatives from non-profit organizations from 11 countries from all over the world.

Speakers from the event included Daniel Hannan, Member of the European Parliament and member of the UK Conservative Party; Dr. Thierry Baudet, leader of the Dutch Forum for Democracy (FvD) party in the Netherlands; Dominik Tarczynski, Polish member of Parliament from the ruling Law and Justice (PiS) party; British political activist and media personality Katie Hopkins; Hungarian lawyer and director of the Center for Fundamental Rights in Hungary, Dr. Miklos Szantho; and South Korean Attorney Pyung-Woo Kim, who was the defense council for former President Park Geun-hye in her 2017 impeachment case.

“I don’t see us as a political movement or [Political Action Committee]. We see very strongly that the predominant battle is in the culture. People will do politics, but the real battlefield is in the culture. The left has known this forever. They’ve taken over everything,” AFA president Karen Siegemund told The Epoch Times.

In combating these elements of society, Siegemund said the AFA is focused on five areas of protecting the tenants of Western Civilization: global governance, radical environmentalism, Islamization of the West, and the corruption of academia and the media.

Siegemund, who has a BA in applied mathematics, an MA in international relations, and a PhD in education in American culture, worked for nearly 20 years as a scientist in underwater acoustics, developing sonar systems for finding Soviet submarines, as one of the first women to work in that field. She taught for many years before getting involved in advocacy groups following a realization that governments and media were distorting the truth.

The event’s speakers highlighted various issues that each of their nations are facing in regards to communist and socialist movements, immigration, and other concerns.

John Fund from the National Review spoke on the fall of the Berlin Wall as a “metaphor for freedom and the loss of freedom that are now happening again in Europe,” said Siegemund.

Katie Hopkins and keynote speaker Daniel Hannan, both from the UK, each discussed issues facing Great Britain, including the upcoming Brexit deadline at the end of October, as well as the prospects of a general election in the House of Commons, both of which are major tests for new Prime Minister Boris Johnson.

Dominik Tarczynski, Polish member of parliament from the ruling Law and Justice Party (PiS), spoke on the struggle that Poles went through under Nazi and Communist occupation. Poland now is pushing back on EU pressure to take in migrants from the Middle East and North Africa.

Tarczynski said current liberal members of the Polish Parliament and center-left political parties are led by former Communists, such as Wlodzimierez Czarzasty, president of the Democratic Left Alliance.

Dr. Thierry Baudet, leader of the Dutch Forum for Democracy Party (NvD) discussed his nation’s struggle with the migrant crisis, its loss of national identity in an effort by the current government to be more international, as well as his party’s desire to leave the EU.

The panel also featured speakers from Asia, including Hong Kong and China. Peter Lee, attorney and defense council for former South Korean President Park Geun-hye during her 2017 impeachment, spoke on Communist infiltration of the Korean government by North Korean sympathizers and the targeting of individuals that oppose North Korea.

The most inspiring part of the event, according to Siegemund, was Claudia Roset’s comments on the Hong Kong protests, where she is currently located. Roset is an award-winning journalist and former Wall Street Journal and New York Times contributor who is famous for her on site coverage of the 1989 Tiananmen Square massacre.

“Skyping in from Hong Kong which was an astounding experience. We played the new Hong Kong national anthem by the protesters. There was not a dry eye in the place.”

The event also drew a small number of up to 15 protesters, who advertised on Facebook that the Luxe Hotel was hosting a “Nazi-themed event.” Protesters placed a poster over the Luxe Hotel’s entry sign to read “Nazi Hotel” and handed out flyers to people entering the hotel to warn them of the event taking place, according to attendees who spoke with The Epoch Times.

Siegemund said that these intimidating tactics by left-wing agitators are the reason why so many events are shut down.

“What’s terrifying about this is that venue after venue, these groups will do whatever they can to shut down conservatives. They know that calling us ‘Nazi’ works and a lot of venues will pull their commitments. We really need to ensure that these venues know that these people are lying to them and using the word ‘Nazi’ to describe anybody that they don’t like. People are being grossly misled and that makes me very sad.,” Siegemund added.

AFA is planning future events, including a panel on tech companies and Silicon Valley with Dr. Robert Epstein on November 18th, and in January it will be hosting a forum with people who will be sharing their stories about living under socialism and communism.