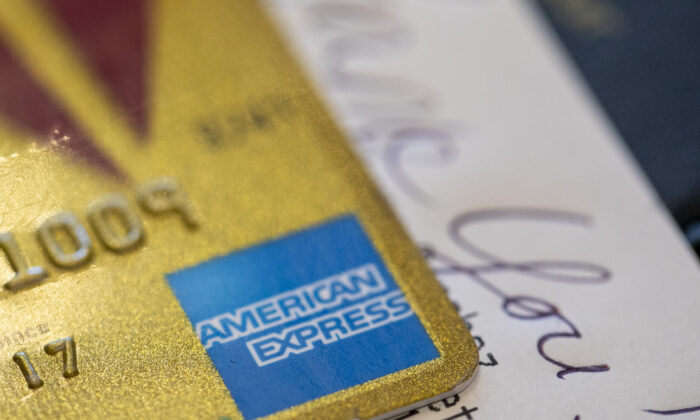 NEW YORK—American Express’ profits fell 14 percent in the second quarter, the company said Friday, as higher expenses more than offset record spending on its network by its cardmembers.

The New York company saw a massive surge of spending on its proprietary cards in the quarter, up 30 percent from a year ago, a surge that the company attributed to higher travel and entertainment spending. Spending on AmEx’s corporate cards also increased which is notable because companies are still hunkered down in the pandemic and reluctant to spend money on travel.

But the jump in card spending was negatively impacted by two different factors. AmEx set aside $410 million in the quarter to cover potentially bad loans, compared with the $606 million the company released from its loan-loss reserves in the same period a year earlier. Typically banks and credit card companies put more money into their loan-loss reserves when they expect more loans to go bad in the future.

The company also had a big uptick in expenses, mostly due to cardmembers redeeming points for travel-related benefits. There have been reports this summer of consumers cashing in their points—accumulated during the pandemic—to cope with high airfare and hotel costs this summer, and AmEx’s results seem to confirm that trend.

Despite the higher expenses, AmEx raised its full-year revenue forecasts and said it is maintaining its full-year profit forecast of $9.25 to $9.65 a share.