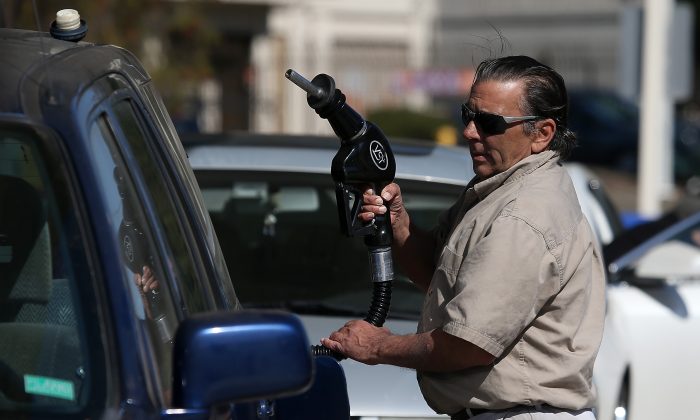 A gas station in Mill Valley, Calif., on March 3, 2015. The pump price for gasoline was $2.24 per gallon on Aug 29, according to EIA. This was the before Labor Day since 2004. (Justin Sullivan/Getty Images)
Business & Economy

Before the summer travel season came to an end, the average retail price of regular gasoline in the United States hit a record low. The pump price was $2.24 per gallon on Aug. 29, according to the U.S. Energy Information Administration (EIA). This was the lowest price before Labor Day in over a decade.

Gasoline consumption peaks during the summer season between two holidays: Memorial Day in late May and Labor Day in early September. Although the average demand in August rose by nearly 2 percent year-on-year, the average pump price was 27 cents per gallon lower on Aug. 29 compared to the same period last year.

Labor Day typically marks the end of the summer season and it is the last weekend for Americans to hit the road for a long holiday.

The retail gasoline prices ranged between $2.01 per gallon in the Gulf Coast region and $2.59 per gallon on the West Coast.

California, which has the most expensive gasoline, has “a tightly balanced gasoline market, tighter environmental specifications, and higher taxes,” according to the government agency.

The average pump price in California was $2.71 per gallon as of Aug. 29, with San Francisco and Los Angeles having the highest gasoline prices in the state.

And the Gulf Coast region, which has large refinery capacity, continues to enjoy the lowest gasoline prices in the nation, with prices like $1.97 per gallon in Houston.

The U.S. retail price for gasoline has increased 51 cents per gallon since mid-February this year, when it hit the lowest point at $1.72 per gallon. The prices picked up as a result of higher crude prices and strong demand during the summer season.

The agency expects the gasoline price to drop to $1.95 per gallon in the fourth quarter of this year. This implies an average of $2.06 per gallon for the whole year.