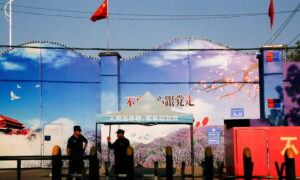 American Corporations Will Have to Take a Stand on China, Expert Says

American corporations will sooner or later have to take a stand on the Chinese regime’s repressive practices, said Clyde Prestowitz, author of “The World Turned Upside Down: America, China, and the Struggle for Global Leadership.”

U.S. firms, eager to do business in China, have adopted a “satisficing” practice to avoid offending the country’s communist rulers and being locked out of the massive Chinese market, Prestowitz said in an interview with EpochTV’s “American Thought Leaders,” referring to a decision-making strategy that aims for a satisfactory result, rather than the optimal solution.

But these companies won’t be able to continue such a practice for too much longer, Prestowitz believes, adding that the change isn’t going to happen overnight, but this is the overall direction. Prestowitz was a lead negotiator in the first U.S. trade mission to China in 1982 and has advised four presidents, both Republican and Democratic.

Significant inconsistencies exist in the American business approach in China, according to Prestowitz. For example, the United States has various sanctions relating to the regime’s abuses in the region of Xinjiang, and has prohibiting imports from the region made with forced labor. These were enacted in response to the Chinese Communist Party’s (CCP) genocide against ethnic Muslim minorities in the region. Yet, by doing business elsewhere in China, American corporations are still indirectly helping the regime carry out its repression in Xinjiang, he said.

In Prestowitz’s view, this “satisficing” approach won’t last long as it will become increasingly apparent the Chinese regime is not like the United States, and that free trade won’t bring about a democratic China, as Western analysts had previously predicted. He added that the fundamental division between America and a CCP-controlled China is not material but “moral.”

“The more a free world entity invests in China and helps to strengthen this anti-free speech, anti-liberty, anti-soul Communist Party, the more it’s not about money. It’s about fundamental human values,” Prestowitz said.

“Major corporations are going to find it very difficult to justify making money at the expense of human values.”

Many people in the West may not be aware of the informality of doing business in China, given that there’s no rule of law in the country, Prestowitz noted.

“In China, you don’t go to court against the Chinese Communist Party—you can’t win,” he said. “So what it means is that the government doesn’t have to issue an order, he [an official] can just lift his eyebrows, and say, ‘Well, we have an inspection coming up next month.’ And who knows what kind of an inspection.”

Thus, foreign companies constantly face the threat of informal and opaque investigations by Chinese authorities, if they don’t follow the Party line, he said.

Prestowitz described the CCP as a “purely Leninist” Party: “The characteristic of a Leninist party is seeking to control everything very narrowly in very few hands.” In addition, the Party also has its own army: the People’s Liberation Army (PLA), he noted. While Americans usually think of the PLA as the “Chinese army,” they should view it as equivalent to a Democratic Party’s army or a Republican Party’s army, according to Prestowitz.

Moreover, CCP General Secretary Xi Jinping “names at least a third of the major CEOs in China,” said Prestowitz. He said that a third of China’s GDP came from state-owned enterprises (SOEs) whose top leaders were appointed by the Party.

Due to all the controls it has on society, the CCP is able to implement a “completely coordinated strategy” to ultimately unseat the United States on the world stage, said Prestowitz.

In addition, Prestowitz said the United States should deal with the CCP and Chinese people separately becaues anti-free speech, anti-free market, and anti-democracy are not in Chinese genes but the CCP’s genes.