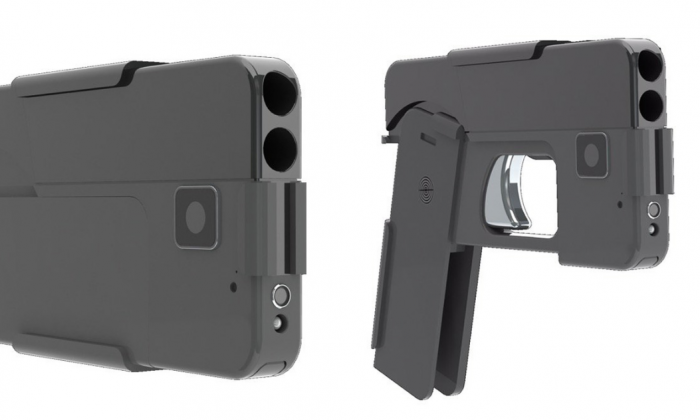 American Company Reveals Double-Barrel Handgun That Looks Like a Smartphone

An American company has created a double-barrel handgun that looks like a smartphone.

The .380 piece doesn’t fire in its resting position, requiring the user to unfold it first.

“With one click of the safety it opens and is ready to fire,” the company said on its website.

[Ideal Conceal] will be virtually undetectable because it hides in plain sight.
— Ideal Conceal

Ideal Conceal “will be virtually undetectable because it hides in plain sight,” it added.

When in its resting position, the gun can fit into pockets like an actual cell phone. It’s about the size of a Samsung Galaxy S7.

Kirk Kjellberg told NBC the idea for the gun came to him after he attracted unwanted attention for carrying a concealed weapon into a restaurant.

“A boy spotted me in the restaurant and said loudly, ‘Mommy, Mommy, that guy’s got a gun!’ And then pretty much the whole restaurant stared at me,” he said.

Some have expressed concerns about the gun, primarily that children would get their hands on it and get hurt.

But Kjellberg dismissed those concerns.

“In America, we have lots of children in contact with pistols already. There’s been quite a few incidents long before my product came along,” he said.

“For me, it’s not the gun. It’s the people. So if you have a pistol and you have children anywhere near you, it’s your responsibility to lock that stuff up and keep it away from children.”

More than 4,000 inquiries have been made about the gun, Kjellberg told KARE11. His company is based in Monticello, Minnesota.

“It’s just made for mainstream America,” he said.