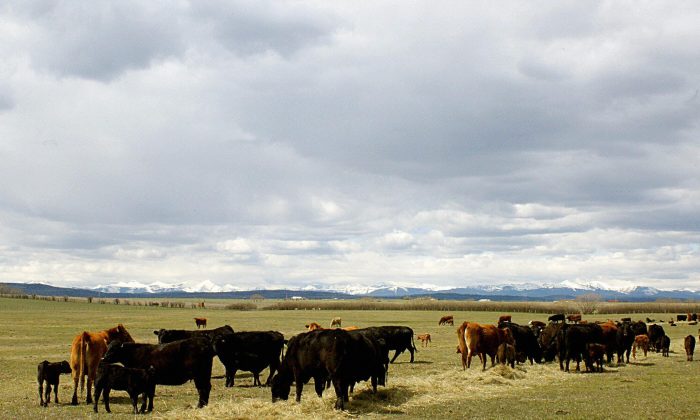 This May 21, 2003 file photo shows Alberta cattle feeding on a ranch outside Calgary, Canada. The prices charged for imported U.S. dairy to Canada have been a sticking point in U.S.-Canada trade negotiations. (DAVID BUSTON/AFP/Getty Images)

Our nations share the world’s longest secure border; approximately 400,000 persons and goods and services worth about US$1.7 billion cross it daily.

We share one of the largest trading relationships in the world. Canadians imported US$283 billion worth of American goods last year—more than China, Japan, and the U.K. combined. Almost three quarters (73 per cent) of Canadian exports go to the United States.

Read More
The United States, Canada, and the Tariff War

Millions of good livelihoods on both sides of the border depend on our partnership. Eight or nine million U.S. jobs depend on Canadian trade and investment.

Our two peoples enjoy the most successful bilateral trading relationship in the world, with the North American Free Trade Agreement (NAFTA) being the most important component. We not only sell to each other, we make things together to sell at home and abroad and, in doing so, create millions of jobs on both sides of the border. Success is reflected in all aspects of the partnership.

NAFTA has also contributed to the global competitiveness of the North American economy with many areas of cooperation among the three national partners. It is the largest economic partnership in the world, with a regional market of 480 million people and a combined GDP of US$21 trillion.

Consider as an example Canada’s partnership with the states of Ohio and North Dakota. It is the number one market for Ohio-made goods and is a significant source of its investment. Ohio sells more goods to Canada than to its next seven largest foreign markets combined, and exports US$18.9 billion in goods and U.S.$1.1 billion in services to Canada yearly. Canada exports US$12.2 billion in return. The 291 Canadian-owned companies operating in Ohio provide over 25,000 jobs, with an average annual wage of US$45,930.  In total, 308,700 Ohio jobs depend on trade and investment with Canada.

North Dakota is the state most heavily dependent on trade with Canada. Almost 84 per cent of its exports — chiefly oil, front loaders, ethyl alcohol and wheat — wind up north of the border, while 54 per cent of its imports come from the Great White North.

Maintaining strong people-to-people ties between border cities and states/provinces testifies to the enduring positive relationship the two countries share. The education sector has long benefited as well from students crossing the border to attend each other’s institutions.

In February, President Trump said “Canada does not treat us right” on trade. His concern seems to focus on Canada’s supply management system in dairy products. His charges that Canada is treating the U.S. unfairly and taking advantage of bad trade deals negotiated by a previous administration are simply incorrect.

Trump’s decision on May 31 to slap tariffs on imports of Canadian steel (import duties of 25 per cent) and aluminum (10 per cent) based on national security insulted many Canadians and rendered the future of NAFTA more uncertain.

Representatives of U.S. automakers have warned that the tariffs would harm the American auto industry and invite retaliation by its trading partners.

Canada has vowed to impose measured countermeasures. Prime Minister Justin Trudeau and Foreign Affairs Minister Chrystia Freeland announced $16.6 billion worth of Canadian tariffs that will be applied as of July 1, targeting everything from whisky to washing machines and peanut butter to pedicure products—in addition to steel and aluminum.

Kelly Craft, the new U.S. ambassador to Canada, recently wrote: “Despite our best efforts and persistent, high-level engagement, we were unable to conclude negotiations by June 1. But we continue to talk, and I am confident that if we reach a deal on NAFTA, we can address the steel and aluminum challenge in a mutually satisfactory way…We know we need each other. We know we are two strong countries that are even stronger together.”

Trade with Canada is vitally important to the U.S. economy.  The Canadian-U.S. relationship is currently crossing a tough patch but ultimately will flourish again.