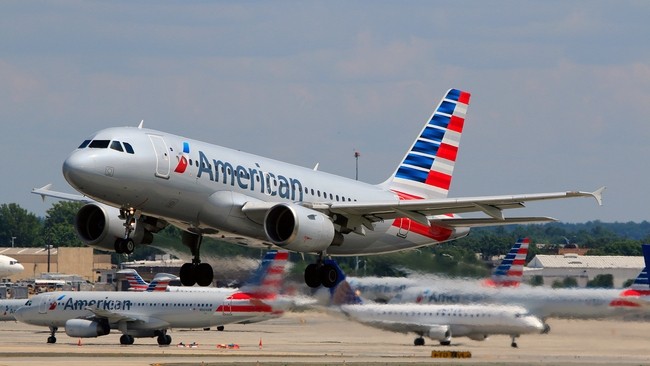 An American Airlines flight was diverted to Denver on Tuesday Feb. 19.
US News

American Airlines flight 1405 en-route to San Diego from New York was diverted to Denver after a man suffered a heart attack on the flight on Tuesday evening. The crew and pilot were praised for their skill in handling the situation.

Flight 1405 bound from New York on Tuesday evening had to be diverted to Denver when a passenger on board suffered a heart attack. At the time of the incident pilot told Air Traffic Control there was a cardiac incident on the plane and two nurses were working on the patient.

A passenger on flight, Lara Diamonds, praised the efforts of the flight crew who she said were amazing throughout the incident, on Twitter.

#AmericanAirlines flight 1405 en route to San Diego just diverted to Denver to land after a man collapsed of apparent heart attack. Flight crew were amazing throughout. Pilot just came through to ask if anyone has any questions and to reassure everyone. Great job @AmericanAir pic.twitter.com/YMLH6G9kRu

The details of the passenger who suffered the heart attack was not disclosed. There was no update on the individual’s current health who was carted off the plane in Denver.

OMG. How scary for his loved ones and the passengers. Do you know – is he going to be OK? I’ll pray so.

However, many hoped the patient would make a full recovery.

Following the incident, the pilot requested the assistance of the customer service to take a dog on board for a walk.

“Customer service just came onboard to take a nice man named Andy’s dog off the plane to go to the bathroom,” she said.

Pilot called for an all doggy potty parade ? pic.twitter.com/fVgSU0T22Y

The flight bound from Miami to New York, was delayed by more than two hours.

Selter said she got up from the seat to stretch her arms when one of the crew members walked up to her and asked to take a seat.

“The plane wasn’t taking off. I told him to relax. But he had something against me,” Selter said, Page Six reported. “He was so nasty.”

Following the heated argument between Selter and the crew, she was asked if she preferred to leave the flight to which Selter replied “yes” but she said her word was laced with sarcasm.

The crew got in touch with the pilot and asked to dispatch security to escort the passenger off the plane.

“American Airlines calls the shots,” one of the five security guards who showed up, was seen saying in one of the videos. “They don’t want you to fly on their plane today.”

As a show of solidarity when Selter was escorted off the plane, another passenger got up to leave with her saying she “was just standing because [Selter’s sister] and the other passenger went to the bathroom. And then one of the crew members, he just came and started shouting at her, harassing her, it was really bad.”

After the incident, American Airlines spokesperson issued a statement saying Selter was escorted out due to a disagreement between her and the crew, but she was offered accommodation and transportation which Selter duly declined to accept.

In response to the incident that transpired yesterday, the airlines expressed their gratitude to the passenger for the praise lauded on them.

“Thanks for the kind words, Lara. We’re glad to hear our crew and pilot were able to calm everyone concerns,” the airlines said.