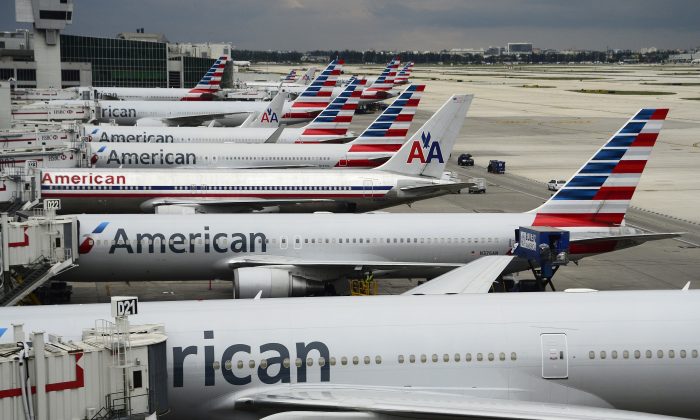 American Airlines passenger planes are seen on the tarmac at Miami International Airport in Miami, Florida on June 8, 2015. (Robyn Beck/AFP/Getty Images)
US

GRAPEVINE, Texas — An American Airlines aircraft landed safely at Dallas-Fort Worth International Airport despite a dramatic discharge of flames from one of the engines.

American spokesman Ross Feinstein (FYN’-steen) says none of the 136 passengers and crew was injured when Flight 438 to Seattle returned to Dallas about 20 minutes after takeoff Wednesday night.

A Federal Aviation Administration statement says the pilot reported an engine problem causing compressor stalls, which discharged flames from the back of the engine.

Feinstein says the left-side engine of the Airbus 321 was not on fire, despite the flames, and that the engine remained operational as the aircraft landed.

“The aircraft landed safely and taxied to the gate on it’s own power,” Feinstein told the Fort Worth Star-Telegraph.

According to FlightAware.com, Flight 438 departed for Seattle at 10:51 p.m. local time before it climbed to 3,000 feet when the compressor issue in the engine apparently took place. The plane quickly turned around before making its emergency landing at the DFW airport, landing at 11:11 p.m.

Girl Who Was Groped on American Airlines Flight Seeks $10 Million