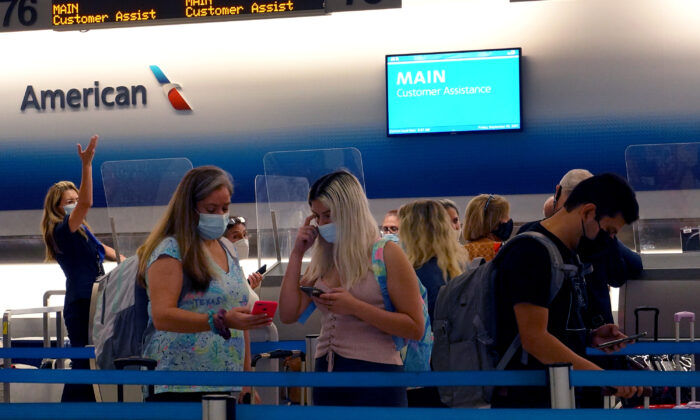 Travelers wait to drop their baggage at the American Airlines counter in the Miami International Airport in Miami, Fla., on Sept. 3, 2021. (Joe Raedle/Getty Images)
Companies

American Airlines (AAL) has made no shortage of headlines this summer—perhaps only a shortage of staffers.

After a tumultuous season, the labor union representing the airline’s pilots has announced that it will begin “informational picketing” in three of the airline’s major hubs on account of fatigue, lack of “adequate accommodation” and an unjust work schedule.

“Our airline needs scheduling practices that support the safety margin, respect pilots’ and passengers’ needs, and de-risk American Airlines to protect and improve revenue,” the Allied Pilots Association said in a statement.

The scheduled demonstrations don’t exactly come as a surprise.

Back in June, the airline began canceling hundreds of scheduled flights due to lack of staff and other weather- and maintenance-related issues, continuing to cancel between 50 and 80 flights per day through the middle of July.

“The first few weeks of June have brought unprecedented weather to our largest hubs, heavily impacting our operation and causing delays, canceled flights, and disruptions to crewmember schedules and our customers’ plans,” American Airlines said in a statement at the time.

Related: American Airlines Will Cancel Hundreds of Flights Due to Staffing Shortages

“That, combined with the labor shortages some of our vendors are contending with and the incredibly quick ramp-up of customer demand, has led us to build in additional resilience and certainty to our operation by adjusting a fraction of our scheduled flying through mid-July.”

Prior to that, it was reported that the company was asking its Dallas/Fort Worth employees to pick up extra shifts during the summer months without offering any additional compensation such as overtime pay or bonuses.

The airline, however, was up around 5.52 percent year over year as of Wednesday morning.