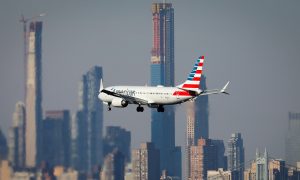 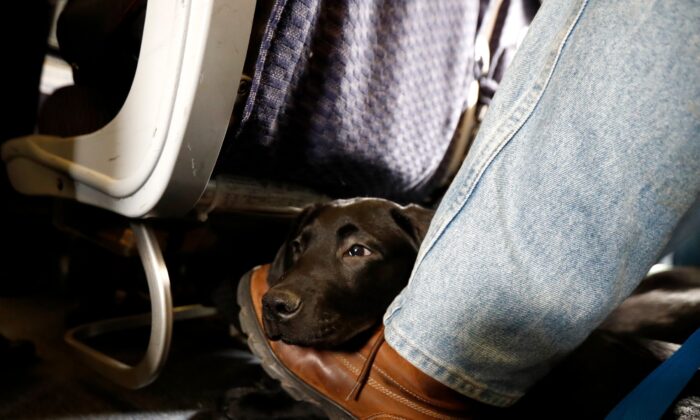 A service dog rests on the foot of its trainer while sitting inside a United Airlines plane at Newark Liberty International Airport in Newark, N.J., on April 1, 2017. (Julio Cortez/AP Photo)
Business

DALLAS—American Airlines is banning emotional-support animals in a move that will force most owners to pay extra if they want their pets to travel with them.

The airline said Tuesday that it will allow animals in the cabin free of charge only if they are trained service dogs. The change takes effect Monday, although passengers who already bought tickets can fly with a companion animal until Feb. 1.

The move follows a similar decision by Alaska Airlines and is likely to be copied by other carriers. The U.S. Transportation Department cleared the way for the crackdown against companion animals last month.

American said passengers with a service dog will need to complete a government form vouching for the dog’s health, training, and temperament.

Other animals, including dogs not trained as service dogs, will only be able to fly in the cargo hold or a kennel that fits under a seat in the cabin. Either way, American will collect a pet fee ranging from $125 to several hundred dollars.

Jessica Tyler, American’s president of cargo, said the rules will help passengers with service animals and protect employees on planes and in airports.

The number of passengers flying with companion animals grew rapidly in recent years, with some saying the animals helped them overcome anxiety and other issues. Passengers only needed a note from a health professional, and a cottage industry sprang up to provide those notes along with vests and other accouterments for their animals.

Last month, the Transportation Department settled the matter, siding mostly with the airlines. It said carriers were free to ban any animal other than dogs formally trained to help people with physical or psychological disabilities.

The department estimated that under the new rules airlines will scoop up $59.6 million a year in pet fees.