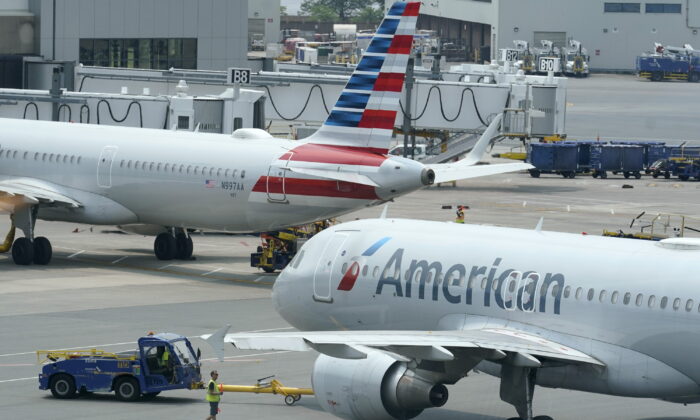 DALLAS—American Airlines earned $476 million in the second quarter on record revenue from summer travelers and said Thursday that it expects to remain profitable in the third quarter.

It was American’s first quarterly profit without government pandemic aid in the COVID-19 era.

While revenue from leisure travelers is soaring, so are costs, especially for fuel. That kept quarterly profit 28 percent below the same period in 2019.

American has been more aggressive than its closest rivals in rebuilding its schedule to nearly pre-pandemic levels. It has struggled at times to run that big an operation.

American canceled 4,900 flights in June, more than any other U.S. airline, and scrubbed the highest percentage of its schedule among major U.S. carriers, according to figures from FlightAware. Only Southwest Airlines had more flight delays.

Airlines have blamed bad weather and understaffing of federal air traffic controllers for many of their flight delays this summer, but part of the problem is also a shortage of workers. Airlines paid tens of thousands of employees to quit after the pandemic devastated their business in 2020, and are still hiring and training replacements.

CEO Robert Isom said American has hired 20,000 people to cover attrition and added new positions. The only staffing shortage, he said, concerns pilots at regional affiliates, which fly smaller planes under the American Eagle brand. That has led to the equivalent of parking 100 Eagle planes, officials said.

American could trim scheduled flights to run more smoothly — as rival United Airlines announced Wednesday that it will do for the rest of this year.

“We are sizing the airline for the resources we have available and the operating conditions we face,” Isom said Thursday on a call with analysts and reporters.

London has become a flashpoint for airlines and their passengers — a symbol of how the industry has stumbled in handling huge crowds. United CEO Scott Kirby called out Heathrow Airport on Wednesday, and American’s chief government-affairs officer, Nate Gatten, did the same Thursday.

Gatten said Heathrow officials told American “on extremely short notice” last week to cancel departing flights to help the airport manage overcrowding. He said that left the airline with few options to reroute passengers. Heathrow is expected to keep some type of constraints in place until mid-September, although airlines don’t know exactly what the rules will be, he said.

Air travel in the U.S. has returned to nearly 90 percent of 2019 levels, according to government figures, although corporate travel remains down 20 percent to 25 percent, American said. International bookings improved during the quarter, American said, and are expected to keep rising now that the government has dropped a requirement for a negative COVID-19 test for people flying to the United States.

Inflation and the economy, however, remain risks for the airlines. United’s chief commercial officer, Andrew Nocella, said improvement in business-travel demand has slowed in the last few weeks — coinciding with troubling reports about inflation and economic growth.

“With the economy potentially worsening, business travel’s recovery is something we will be watching carefully,” he told analysts.

For the most part, however, airlines and analysts sound more upbeat.

Colin Scarola, an analyst for CFRA Research, said a consumer pullback on travel is possible but would be modest because of pent-up travel demand, job growth and savings. Corporate and long-haul international travel are still so depressed that they “will naturally climb back up over the next year even if there is a recession.”

American, based in Fort Worth, Texas, said it expects a profitable third quarter, based on travel demand and the forecast for fuel prices. It said revenue will be 10 percent to 12 percent higher than the same period in 2019 even as it cuts passenger-carrying capacity by 8 percent to 10 percent.

In the second quarter, American’s adjusted profit was 76 cents per share, a penny below the forecast of analysts surveyed by FactSet.

The average Alaska flight was 88 percent full, similar to numbers at American, United, and Delta. The averages include off-hour flights, suggesting that there are no empty seats on prime morning and late-afternoon flights.