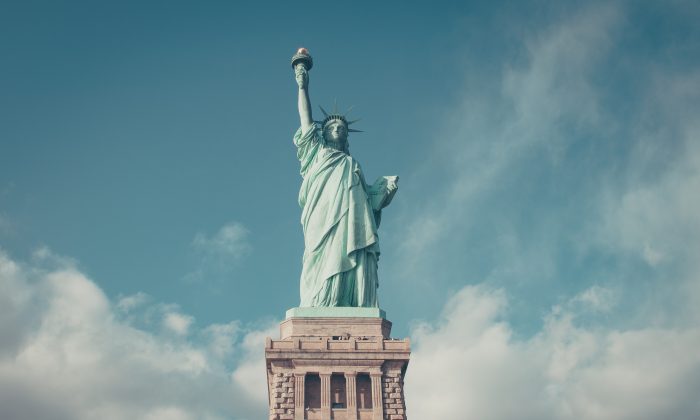 The second verse in our treasured song, “America the Beautiful,” reminds us of our noble history and beckons us to reawakening the nation:

O beautiful for pilgrim feet
Whose stern, impassioned stress
A thoroughfare for freedom beat
Across the wilderness!
America, America!
God mend thine every flaw
Confirm thy soul in self-control,
Thy liberty in law.

This verse is an inspiring reminder of our destiny, forged by history, demanding that we rise from contemporary challenges to the ideals that America stands for.

Just a few days ago, America was once again blistered by another corruption scandal exemplifying our crisis of character.

Former New York Assembly Speaker Sheldon Silver, once one of the state’s most powerful politicians, was convicted of charges involving devious schemes to earn $5 million illegally and then lying about it.

Silver now faces decades in prison after being convicted of all charges: honest-services fraud, extortion, and money laundering.

Corruption throughout every level of American politics is business as usual.

America’s cauldron of corruption poses a fundamental assault to our national security and principles of democracy, freedom, and liberty.

America’s cauldron of corruption poses a fundamental assault to our national security and principles of democracy, freedom, and liberty.

Corruption impacts security on our borders as well as in our neighborhoods, the integrity of verdicts in our courts, and all government services.

Aside from Silver’s conviction, additional scandals of public officials, documented on the FBI website include the following:

Tragically, we are continually witnessing violence throughout our workplaces, communities, schools, campuses, and families and there is no end in sight.

America must wakeup, take action, and stop the carnage.

Recent and notorious tragedies of America’s culture of violence paint an unsettling picture:

Dec. 2, 2015: At least 14 people died in a shooting at a social services center in San Bernardino, California.

Nov. 27: A reprehensible, deadly attack and standoff at a Planned Parenthood clinic in Colorado Springs and the killing of three people including a police officer. Nine others were injured.

Oct. 1: A gunman shot and killed eight fellow students and a teacher at Umpqua Community College in Roseburg, Oregon.

May 23, 2014: A killer follows through on his meticulously planned attack near the UC Santa Barbara campus that leaves six dead and seven wounded.

America must have its eyes wide open and resolve to put the lessons learned from these horrific acts into action. Complacency, incompetence, and apathy cannot be excuses for failing to remedy America’s culture of violence.

The brokenhearted families of those gone too soon, especially the children and parents of the victims, demand America’s commitment to violence prevention.

The recent charges against a Chicago police officer for the first-degree murder of 17-year-old Laquan McDonald were made more difficult for the city to accept because of the way city officials delayed the indictment for a full year. The incident has once again cast the criticality of accountability, transparency, and integrity into the police–community spotlight.

As detailed in my article titled “Police–Community Crisis: Rise to the Occasion” for the May 29, 2015, edition of the Epoch Times, “over 900,000 dedicated law enforcement officials perform acts of respect, courtesy, and bravery each day throughout America, and these dedicated professionals deserve honor. Yet, there are issues emerging that crystalize the need for necessary police reforms.”

In the article, I further argued, “This is a defining moment for police reform in America and the training of ethical protectors.”

America, the eyes of the world are upon us. The clarion call for leadership, vigilance, and collaboration as our heartbeat will resuscitate the nation.

America the Beautiful will rise from the cauldron of corruption, culture of violence, and police–community crisis through a renewal, when we reignite the principles of character, courage, and community.