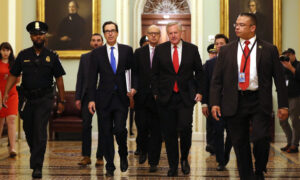 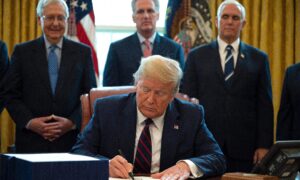 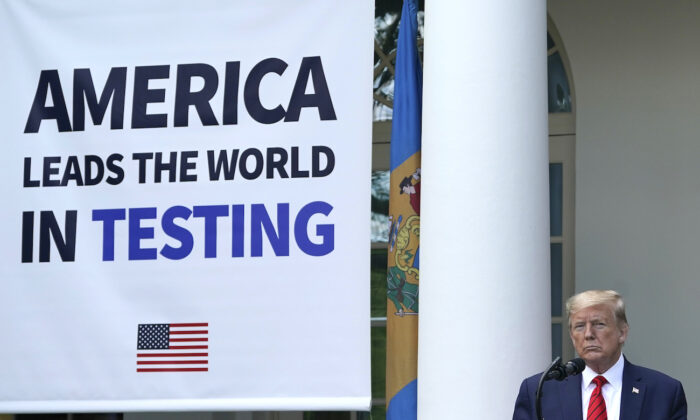 President Donald Trump holds a press briefing about CCP virus testing in the Rose Garden of the White House on May 11, 2020. (Drew Angerer/Getty Images)
AMERICA

The United States has conducted more than 9 million CCP virus tests and has become “the world’s leader in coronavirus testing,” the White House stated on May 11, with President Donald Trump heralding the achievement as a key element of the administration’s plan to safely reopen the country.

The announcement comes as the administration is set to distribute $11 billion to U.S. states, territories, and tribes to directly support testing for the CCP (Chinese Communist Party) virus, the novel coronavirus that emerged from Wuhan, China, in late 2019.

Trump said the United States had within a few months developed a testing capacity “unmatched and unrivaled anywhere in the world.”

“Three weeks ago, we were conducting roughly 150,000 tests per day. Now we’re doing approximately 300,000 tests per day—a 100 percent increase—and it will go up substantially from that number,” Trump told reporters at a COVID-19 press briefing at the White House.

The United States will have performed more than 10 million tests by the end of this week since the outbreak began—nearly double the number of any other country, Trump said.

By the end of May, every single state will be able to test more people per capita than South Korea has tested per capita in four months since the outbreak began, according to the White House.

.@HHS_ASH Admiral Giroir breaks down America’s leadership on testing, by the numbers. pic.twitter.com/jfaR05cdUY

The federal government will send $11 billion to U.S. states, territories, and tribes to help meet the various locales’ testing goals. The money was authorized and appropriated in the CARES Act—the largest stimulus bill in U.S. history signed in late March amid the economic disruptions triggered by the CCP virus.

“We want to focus on high-risk communities like nursing homes, like inner-city areas, where the housing requires close non-spacing. So the states will be doing that,” the official said.

The administration has held multiple conference calls with every state, including with the District of Columbia and Puerto Rico, Trump said, and “jointly developed testing projections and goals for each state for the month of May, altogether totaling 12.9 million tests.”

The administration, via FEMA and HHS, will send about 12 million swabs to states in May to supplement resources from the private sector. Trump said if any state appears to surpass its goal, the federal government is prepared to “provide millions of additional swabs.”

Giroir said that “right now, in America, anybody who needs a test can get a test in America,” referring to people who are symptomatic with a respiratory illness, and people who are believed to have come in contact with individuals who have tested positive for the virus.

“We are starting to have asymptomatic surveillance, which is very important.”

The Food and Drug Administration (FDA) has played a major role in enabling the rollout “of the diagnostic tests, of diagnostic devices, and now of serology tests,” Giroir said.

The FDA has already granted 92 emergency-use authorizations for COVID-19 tests, according to the White House. This is more authorizations than for H1N1, avian flu, MERS, Ebola, enterovirus, and Zika combined.

While many diagnostic tests are performed in laboratories, the FDA has also approved “point-of-care” tests—testing at the time and place of patient care—such as the tests by Abbott Labs, LabCorp, and Roche.

“These efforts have allowed Americans to receive testing results in as little as five minutes, or collect a sample for a test within the comfort of their own homes,” the White House announced in a statement, adding that the tests have “greatly increased America’s testing speed and capacity.”

The FDA on May 8 approved the first antigen-based test for COVID-19 for emergency use.

“This is different than the nucleic acid tests, which are very high complexity, requires the amplification of the genetic material. The antigen test really looks for the presence of the viral protein in the nose,” Girior said, adding that this will help contribute more than 300,000 tests per day.

“Do the math. That’s 9 million point-of-care tests that we will have every month in just a few weeks. It will clearly add to and, to a certain degree, transform our landscape,” he said.