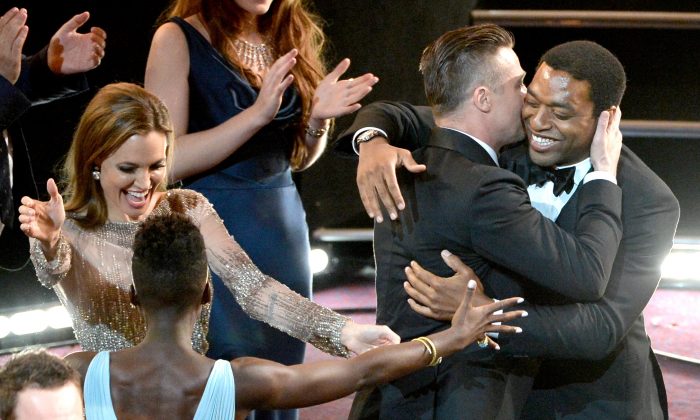 Since Miami Herald columnist Leonard Pitts is one of my heroes, I listened when he said, go and see “12 Years a Slave,” now that it has won Best Picture at the Academy Awards.

Previously, my reasons for not seeing it before the Oscars were the same he said as anyone’s might be. Heard it was hard to watch. Scared it would be depressing.

And there’s one, more personal, reason.

My cousin, sister, and I learned last year that our ancestors owned slaves.

We learned it at my sister’s kitchen table, on a sunny summer day, when we went through a box of family documents Cousin Hannah brought from her home in California. There was an early 19th century letter bequeathing one female servant to the letter writer’s widow. Assigning her as property.

We had guessed that this was our heritage, since our family immigrated to America through Virginia in the 1600s, and soon migrated even further South. Now we knew.

“12 Years a Slave” is closely based on the memoirs of Solomon Northup, who was kidnapped in 1840s America, and survived until his rescue 12 years later.

Whether it’s your direct heritage or not, if you are an American at all, this is part of your history. Whether you are a descendent of slavers, slaves, free people, native people, or recent immigrants—all of us need to understand the truth about slavery.

To this day there is a lot of hot air about this topic—for example, some slave owners were good, and some slaves were content being slaves. When I drove through Mississippi this winter, I saw a billboard asking me to honor my heritage, with some photogenic white men standing in front of a big Confederate flag. Georgia wants to issue a vanity license plate with that flag. The plate is meant to honor such heritage.

Sorry, no can do.

Slavery was and is an abomination. The Civil War was fought to end it here, since America lagged behind European countries in passing a law to end it.

They call it America’s “original sin” for a good reason. We are still paying for it, in our lopsided prison system and in lost potential.

Whatever the opposite of original sin is—that would be redemption—is also connected to slavery.

In the movie, Northup was already a respectable man, honest and good. The way he held onto his character despite bondage and cruelty is inspiring. The just man who mails the letter that ends in his rescue is inspiring. For me it was not hard to watch, and not depressing.

The movie shows his heroic strength, yet it introduces a moral ambiguity that is not in Northup’s book. I’m not criticizing the movie; it’s a masterpiece. I am criticizing the 21st century, in which heroes must have feet of clay.

Eliza is a mother who cannot stop crying after she is sold away from her son and daughter. In the movie, her crying annoys Northup, and he scolds her. In the book, he has nothing but compassion for her and her children.

I saw a man who kept his honor in a world that tried to destroy it.

I also see an America that did the right thing after trying everything else, to paraphrase Winston Churchill. My ancestors could not repudiate the corrupt system they lived in, but I can do it for them.

And by doing so, I can honor my heritage.