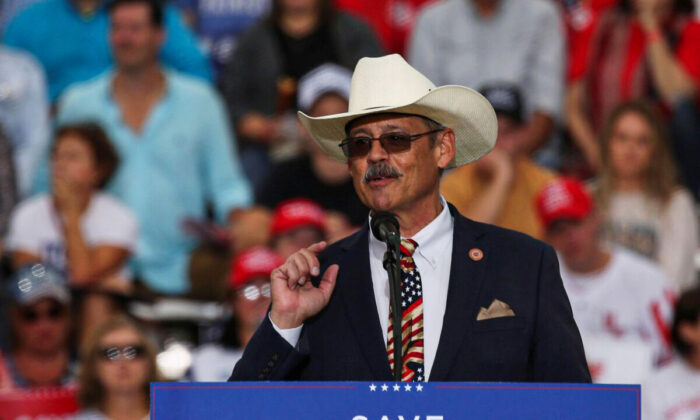 Arizona state Rep. Mark Finchem has won the Republican nomination for Arizona secretary of state in the Aug. 2 primary election.

In the race for the state’s top election post, Finchem has made election integrity a cornerstone of his campaign following the disputed 2020 election and forensic audit in Maricopa County.

“At the end of the day, I stand for the rule of law, that nobody has their thumb on the scale of election integrity and election justice,” Finchem told The Epoch Times.

“We’ve got three months of a grueling campaign,” Finchem said.

On the Democratic side, current Arizona Secretary of State Katie Hobbs trounced Marco López and Aaron Lieberman with 73 percent of the vote to win the party’s nomination for governor.

In a five-way Republican race for Arizona attorney general, Trump-endorsed “America First” candidate Abe Hamadeh currently leads with 29 percent of the vote, ahead of his closest rival, Rodney Glassman, with 24 percent.

In a five-way race for the Republican nomination for the U.S. 2nd Congressional District, Eli Crane enjoys a comfortable lead with 33 percent against his closest opponent, state Rep. Walter Blackman.

In the U.S. 4th District, Kelly Cooper leads in the Republican race with 30 percent of the vote, while Tanya Wheeless is a close second with 25 percent. Dave Giles follows with 19 percent, Rene Lopez with 14 percent, and Jerone Davison with 12 percent.

In the 6th District, Republican Juan Ciscomani leads with 46 percent of the vote over Brandon Martin at 21 percent, Kathleen Winn at 17 percent, Young Mayberry with 10 percent, and Lucretia Free at 5 percent.

Kirsten Engel is the projected Democratic winner with 60 percent of the vote, over Daniel Hernandez at 34 percent and Avery Anderson at 6 percent.