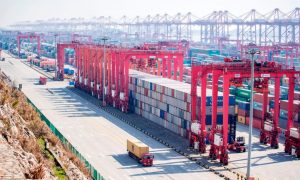 Why Trade With China Is Not Free
0 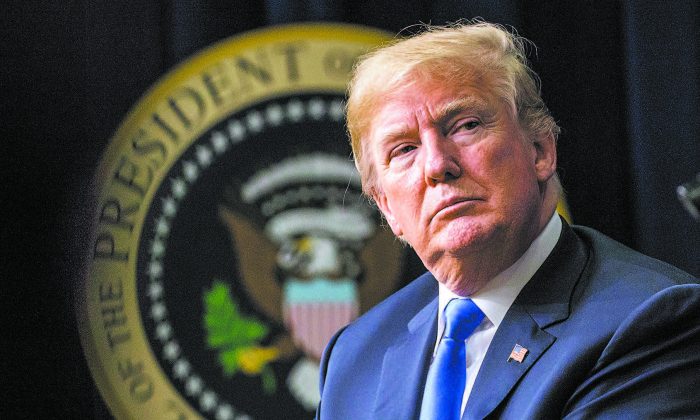 President Donald Trump in Washington on March 22. Trump signed trade sanctions against China on the same day, imposing tariffs of up to $60 billion on Chinese goods in retaliation for the theft of American intellectual property. (SAMIRA BOUAOU/THE EPOCH TIMES)
Trump Administration

America Fights for Its Economic Future

WASHINGTON—President Donald Trump is taking a hard-nosed approach to tackling one of the most urgent problems facing the country.

The trade sanctions that Washington unveiled on March 22 are meant to punish Beijing for employing “unfair trade practices” to steal American technology that will be vital to the U.S. economy in the years ahead.

“If China dominates the industries of the future, it will be very difficult for the United States to have an economic future,” Peter Navarro, a key White House trade adviser, said during a call with reporters.

Trump’s punitive measures include restricting Chinese investment in the United States and imposing tariffs totaling up to $60 billion on Chinese products.

“This is a historic event, and President Trump should be applauded for his courage, his vision, on this,” Navarro said.

Previous administrations warned China but refused to take strong action against its unfair trade practices and instead tried using persuasion, which failed countless times, according to experts. The Trump administration is now moving beyond persuasion to actual penalties.

This is the most serious response taken by any administration in recent memory, said Stephen Ezell, vice president at the Information Technology and Innovation Foundation, a U.S. think tank. He believes this is a long-overdue action.

“What really is at stake here is our intellectual property,” Ezell said. “I was heartened that the administration seemed to understand how important the IP is to the future of the U.S. economy.”

For decades, the Chinese regime’s protectionist and trade-distorting policies have weakened the competitiveness of American companies. According to a report by the U.S. trade representative (USTR), China is implementing laws, policies, and practices that harm American intellectual property rights, innovation, and technological development.

China uses many tactics to steal information, such as forcing foreign companies to partner with domestic firms and hand over their technology and know-how to gain access to the Chinese market. Companies are asked to relocate their production, research and development, and data storage to the country.

Through joint venture requirements and investment restrictions, the Chinese regime has been forcing technology and IP transfer from U.S. companies to Chinese entities for years. These actions have damaged American manufacturing, jobs, and innovation. They have also negatively affected U.S. exports and contributed to the trade deficit with China.

The Chinese regime has pledged several times since 2010 not to use technology transfer as a condition for market access, according to the USTR report. It has also committed to stop pushing for the disclosure of trade secrets in regulatory or administrative proceedings.

Despite all these commitments, China’s technology transfer regime has never stopped.

“American government, American people, American businesses are really fed up with the way in which the Chinese government turned a blind eye to what is going on there,” Rep. Mike Bishop (R-Mich.) told NTD, a sister media of The Epoch Times.

In response to concerns about any retaliation from China, Bishop said, “What kind of retaliation would have any more impact than what we are seeing right now with the cost of the stealing of our intellectual property?”

Global brands are being forced to give away their most important and sensitive technologies. And they have little choice but to comply, as they cannot afford to leave one of the world’s largest markets. However, in the long run, they end up losing their competitive edge in global markets by surrendering “their valuable and hard-won technologies,” stated the USTR report.

“This results in a highly asymmetric playing field where U.S. companies face immensely restrictive policies in China, while Chinese companies are not equally restricted in the United States.”

The Chinese government also uses other tactics to protect its own domestic companies, including massive government subsidies and cyber-enabled theft of intellectual property and trade secrets. According to the USTR report, these practices, for example, have driven 30 U.S. solar companies out of business since 2012, leaving the American solar industry on the brink of collapse.

Solar cells were first invented in the United States, but only 6 percent of world production was based in North America in 2016. Most production has shifted to China and Taiwan over time.

Through state-owned enterprises, China also directs acquisition and investment activity to target foreign enterprises with leading technologies in key sectors, ranging from semiconductors to manufacturing. And the government often orchestrates these acquisitions for strategic purposes.

“China’s sovereign wealth fund—like China Investment Corporation, which has close to $1 trillion [in assets under management]—is not coming here to earn a fair rate of return for its investors,” said Navarro. It is investing in the United States for strategic, industrial, and in some cases military policies, he added.

In 2000, President Bill Clinton permanently granted “most favored nation” status to China, which then became a member of the World Trade Organization (WTO) a year later.

Ever since then, the communist regime has consistently and repeatedly broken WTO rules.

“I have called for such action for years and been disappointed by the inactions of both President Bush and Obama,” said Senate Minority Leader Chuck Schumer (D-N.Y.) on the Senate floor on March 22, commenting on the steps announced by Trump. “I’m very pleased that this administration is taking strong action to get a better deal on China.”

“We’re doing things for this country that should have been done for many, many years. We’ve had this abuse by many other countries and groups of countries that were put together in order to take advantage of the United States,” Trump said during the signing of the presidential memorandum on China on March 22.

“It’s probably one of the reasons I was elected, maybe one of the main reasons. … We’re not going to let that happen.”