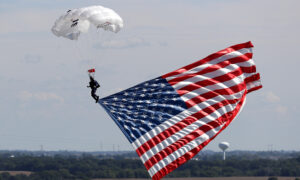 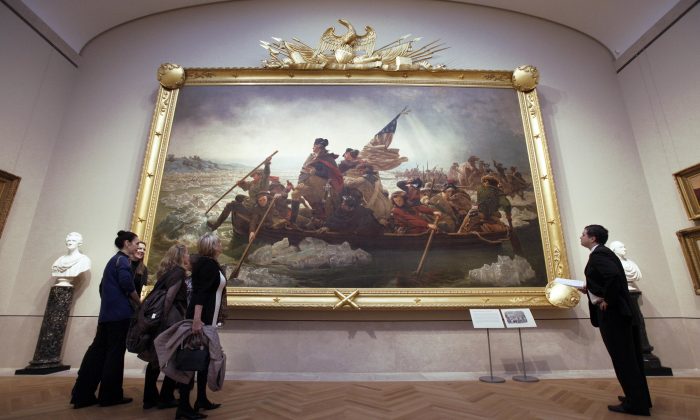 Visitors at the American Wing of the Metropolitan Museum of Art, New York, Jan., 2012. On display is the painting “Washington Crossing the Delaware” by Emanual Luetze, which commemorates General George Washington's crossing of the Delaware River with the Continental Army on the night of Dec. 25–26, 1776. (Richard Drew)
America Essay Contest

America Essay Contest: This Country Is the First of Its Kind

“These are the times that try men’s souls: the summer soldier and the sunshine patriot will, in this crisis, shrink from the service of their country; but he that stands it now, deserves the love and thanks of man and woman.”

General Washington ordered that these words be read aloud to the men of his army not long before they all crossed the Delaware River eastward, this time on the offensive and in the middle of a terrible winter storm, to regain the American initiative at the Battle of Trenton. The American Revolution would survive 1776 after all. And though the War for Independence would end in 1783, the struggle for the American Ideal persists even now.

Could the Founding Fathers foresee, one wonders, the magnitude of what they had designed? An exercise of profound and immense complexity: that citizens of a sovereign nation could peacefully and effectively govern themselves. It is one thing to read the words of John Locke; it is another entirely to establish a society around such radical principles.

To that effect, it is difficult for many of us to take measure of how special the American Ideal truly is. Generations of Americans have lived and died here, blissfully enjoying the individual liberties that people like Washington firmly believed in long before their extent could practically be known.

Just as we have gluttonously become accustomed to the instant connectivity of smartphones, we think little today of what America has given to its citizens, indeed to humanity at large. Freedom of individual expression and religion, a powerful free market economy, socioeconomic mobility based on merit and productivity. We see these tired words inked in history books and etched on plaques and statues, and find ourselves not merely ignoring them, but resisting them! Those very books are burned, the statues torn down. Such is the absurdity of our times.

2020 has been, to say the least, a turbulent year for the United States. But its most failing characteristic, to my mind, has not been the pandemic, or the political and racial tension, or the civil unrest that has resulted in violent protests and riots. It has been the American revulsion to itself, the disheartening observation of so many Americans openly denigrating their own country. Sullied by misinformation and jaded by the collective narrative, they would believe that America is nothing more now than a superpower in decline. Worse still, they look back on our national history and see fault instead of triumph.

America is not a utopia. The historical failures of this nation must always be observed within proper context, and it must be acknowledged that America’s greatest gift is now and has always been its ability to evolve and adapt with the age. This is a nation where a society can decide when the time is right for change, where the people can determine what is collectively important and voice that determination.

Accordingly, this country has withstood every trial and tribulation, amassing an incredible resume in the process. America has overcome imperialism, defeated fascism, and outlasted communism.

It has created and distributed more wealth globally than any civilization before it. It put mankind in the air, and then on the moon, daring us to stretch our imaginations. It has been the hub of our planet’s most significant technological innovations, from the 20th century into the 21st, all while contributing to the overall welfare of people around the world.

It is the first of its kind: a nation of immigrants, people who have flocked from all parts of the globe fleeing persecution or seeking the chance for a better life. People seek America still, ironically more possessed of the wonders of the American Ideal than perhaps many Americans who have blindly enjoyed them for their entire lives. No, America is not a utopia. But it’s as close as we’ve ever come to creating one.

The opening words above were, of course, an excerpt from “The American Crisis,” one of the two seminal works written by Thomas Paine, perhaps the greatest champion of American Idealism who ever lived.

His words rang true in 1776, and the echoes are heard even today. These are the times that patriots are made to remind their nation, and the world, that America represents the best of us because it aims for the seemingly untenable, often with surprising results. It is not a perfect attempt, but it is an altogether incredibly ambitious and honorable one, and that alone is worthy of praise.

To quote Paine once more, “The cause of America is in a great measure the cause of all mankind.” So may it be for all generations to come.

Jose Gil is a dentist living the American Dream outside of Allentown, Pennsylvania, with his wife and three young children.