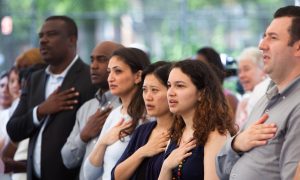 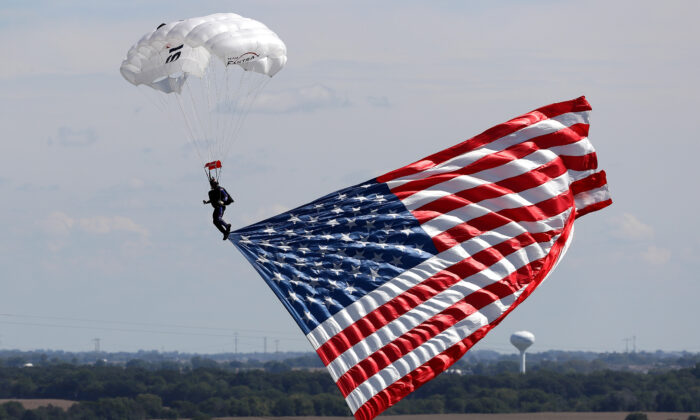 The American Flag is flown in to Chicagoland Speedway in Joliet, Ill., on Sept. 18, 2016. (Jonathan Daniel/Getty Images)
Essay Contest

Born and raised in Mexico, I never thought about leaving everything and everyone I knew for a strange land—until I fell in love with a natural-born American and followed him to his country. I didn’t know what a blessing I was getting myself into.

Right away, I saw that the United States was not what I was told—a selfish, arrogant nation, hungry for power and world control. I was amazed at the number of Americans that volunteer to go abroad and give their time, sometimes even their lives, to help others. So much financial aid flows from this country to all over the world, most of it from people giving out of their own pockets. Before me stood a compassionate nation. The abusive demon turned out to be a helping angel.

The living conditions here also impressed me. In this country, it’s possible for anyone, even without a college education, to earn a comfortable living. Anybody willing to work hard can afford to own a home. But what impressed me the most was to hear people speaking their minds without fear of being thrown in jail, or even murdered. It was plain to me that the rest of my life would be better here, where there was opportunity, where there was goodness, where I could be respected as a human being.

After gaining my citizenship, I decided to learn the history of my adopted land. The United States was about to amaze me again. The story of the birth of this nation is like a thrilling adventure movie. I marveled at the patriots’ courage to stand against the powerful Crown of England, the superpower of their time. I admired their honesty, after independence was won, to focus on what was good for the people, instead of fighting among themselves for power, as is usually the case when one country achieves independence from another.

Every passage of history I read increased my admiration for this country. Then one time, after watching a TV show about the fight for independence, my husband said: “You know, I’m convinced that God had a hand in the creation of this country. Those guys, the Founding Fathers, didn’t have a chance—they lacked means, they were poorly clothed, hungry—and against all odds they won.”

At that moment my eyes fully opened, and I finally saw the reality behind the reality. The Founding Fathers were not just the heroes of an adventure story—they were instruments of God to create a place on earth where freedom could be a reality.

The words “In God We Trust” used to intrigue me. Why does a country that is not a theocracy print that on its money? I decided it was just something nice to say.

I see now that it is far more than that. Those words are the essence of the country, the foundation on which this great nation rests. That is the reason why there is compassion and goodness in this land, why we can speak our minds without fear, and why this country has prospered and risen like no other. Here, like nowhere else in history, God was trusted. And His will was allowed to be the basis for the rule of law.

That is the reason why I love America—it gave me the chance to experience some level of the reality of God.

The United States, the godly country I have come to love, is now going through difficult times. Its very existence is under threat. If we are to survive as a nation, we need to go back and cling steadfastly to the ideals that gave us birth, that all men are created equal, and that our inalienable rights come from God. We need to go back and mint in our hearts, like we do on our money, the mantra “In God We Trust.”

Growing up in Mexico, I was afraid of the future because I saw nothing but struggles with little hope for reward. A door came open. I walked through it, thinking I was leaving home. What a wonderful surprise to realize I was coming home.

I am free now—free to come and go, to do and undo, free to understand, free to love. A sobering truth is that freedom equals power. I have the power to choose a bright future for myself, and for my country. I am one of the free. So are you.

Nancy Simpson is a Spanish interpreter, artist, and co-author of a self-published book, “The View from Sawyer Canyon.” She’s currently living the American dream near Elephant Butte, New Mexico, in an adobe house she built with her husband.

This article was the winner of The Epoch Times essay contest “Why I Love America.”