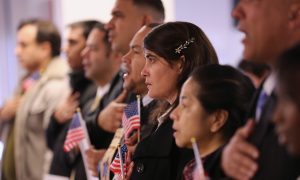 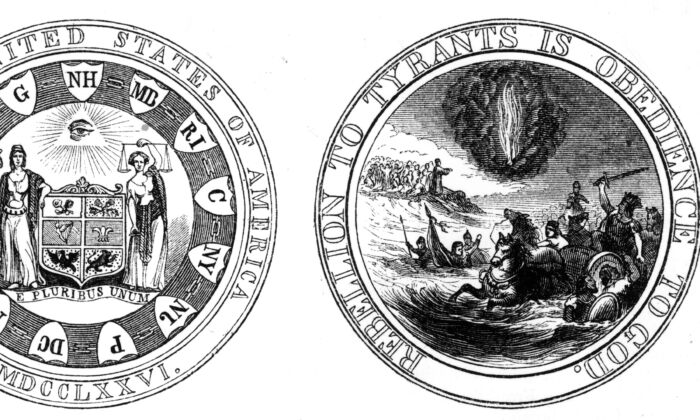 Thomas Jefferson's design for the Great Seal of the United States of America. One side depicts a biblical scene: the drowning of the Egyptian Pharaoh in the Red Sea with the motto "Rebellion to Tyrants is Obedience to God." On the other side, Liberty and Justice support a coat of arms surrounded by the initials of the thirteen colonies. (MPI/Getty Images)
America Essay Contest

America Essay Contest: All People Are Created by God to Be Equal in Dignity

In 1776, the “course of human events” was such that the thirteen American colonies of Great Britain declared their independence. As Thomas Jefferson stated in the Declaration of Independence, the colonists believed that their natural rights were not being respected by the mother country. The time had come to sever the political ties that bound them.

Over the course of the next several years, through war and the birth pains of a new country, our founders crafted a nation that was born of a particular notion of the human person. This notion was that everyone was “endowed by their Creator with certain unalienable rights” that no government could justly take away.

What I love about America is that its founding principles recognize our inherent dignity as children of God. We are called to live not just in freedom, but in a particular kind of freedom marked by virtue. Our three founding documents, the Declaration, Constitution, and Bill of Rights, create a virtuous framework that allows us to live in a system of ordered liberty that provides opportunities for individuals to prosper while supporting the common good.

The Declaration of Independence identifies “life, liberty, and the pursuit of happiness” as being among our natural rights. Our founders conceived of liberty as being oriented toward a freedom for excellence, in which we would be free to do as we ought, not simply as we pleased. In so doing, a man’s liberty would make him a better person while contributing to the common good. There is an unspoken assumption of the virtue of faith underlying this. Through faith we see that our lives have meaning and purpose, and so our liberty is oriented toward making us the best we can be.

But our founders knew that tyrants can distort faith and in so doing they would arbitrarily restrict our liberty. To counter this, they pointed out that our freedoms are “self-evident,” that they are based on a natural law, a law God gave to every man so he can know its truth through the natural light of reason. Thus, America is based on the idea that faith and reason work together to help us see the one truth of God.

A people who try to live purely through reason are devoid of meaning and fall into a relativism where might makes right, as we saw in the Reign of Terror during the French Revolution. Conversely, a system based purely on unquestioning faith leads to tyrants who promote an irrational obedience leading to totalitarianism. The two must balance each other.

Faith gives reason meaning by pointing to our ultimate end with a benevolent God. Reason keeps faith honest by showing that an unreasonable faith is false. Thus, the introduction to the Declaration succinctly lays the foundation for a people who will live by true faith and natural reason.

The Founders also used the principles of subsidiarity and solidarity. Subsidiarity states that issues are handled best at the lowest level of government or community possible. Our Constitution is based on a federalist system. The federal government has certain specified powers, with the rest of the powers reserved to the states, who also push certain decisions down to cities and towns, and also leave room for voluntary associations. This puts the decision-making closer to the people affected, where they are more likely to have influence.

But subsidiarity is not enough, as localities can also have tyrants. Solidarity puts forward the universal rules that apply everywhere to protect our inalienable rights. And that is where the Bill of Rights fills an important need. The Bill of Rights limits the government by emphasizing the natural rights that are endowed to us by our Creator. No level of government can justly violate these. It is important to note that the Bill of Rights doesn’t give us these rights, but rather recognizes that they are God-given so no government can take them away.

America was not founded on the bloodlines of a particular people, but on the idea that all people are created by God to be equal in dignity. All are deserving of a virtuous liberty that contributes to their betterment and the common good. It recognizes that faith consistent with reason gives meaning and purpose to human life. People need to be free to pursue such a faith, and thus pursue happiness through the fruits of their labor and property, freely speak their minds to their leaders, and participate in choosing them.

Americans have not always lived up to the promise of America, but the vision of the founders still moves us forward in the hope of a better tomorrow.

Terryn Boucher lives in Middletown, Connecticut. He works in financial services and has degrees in mathematics and moral theology.