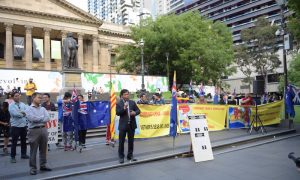 Under the Trump administration, US response to China's OBOR is more coherent and comprehensive than in the past, expert says
By Emel Akan
biggersmaller
Print

WASHINGTON—China’s One Belt, One Road initiative is one of the world’s most ambitious and controversial development programs. Under the Trump administration, the United States is rolling out new infrastructure projects and other initiatives in the Asia-Pacific in an effort to counter China’s growing footprint in the region.

The Chinese Communist Party has made One Belt, One Road (OBOR, also known as Belt and Road) the cornerstone of its plan to expand its geopolitical influence. The initiative aims to deliver trillions of dollars of infrastructure investment to connect Asia, Europe, and Africa. The plan spans almost 70 countries and covers more than two-thirds of the world’s population.

In recent years, however, OBOR has come into question, as most of the projects are financed through Chinese state-controlled lenders, leaving borrowing nations distressed by massive debt burdens.

While OBOR has been going for five years, America’s response to China’s ambitious plan is much more recent, according to Daniel Kliman, a senior fellow in the Asia-Pacific security program at the Center for a New American Security, a Washington-based national security think tank.

“This reflects a failure of imagination,” he said at a panel hosted by the Heritage Foundation on Dec. 17.

“Much like we saw in the case of Chinese land reclamation in the South China Sea, I think American policymakers initially had not fully appreciated the scope and speed of Belt and Road and how it would serve to advance Chinese interests in the world.”

The current administration, however, has taken a strategic view on the OBOR and identified it as part of China’s ambitions to become a world superpower and challenge the U.S. position.

Under the Trump administration, the U.S. response to OBOR has been “more coherent and comprehensive than what we’ve seen certainly in the past and trending in a positive direction,” Kliman argued, adding that there is a lot of opportunity for America to compete, since emerging nations are increasingly concerned about the negative implications of Chinese investment.

“We don’t drown our partners in a sea of debt. We don’t coerce or compromise your independence,” he said. “The United States deals openly [and] fairly. We do not offer a constricting belt or a one-way road.”

National security adviser John Bolton echoed the same concerns about OBOR. Speaking at an event this month, Bolton condemned China’s strategic use of debt to hold African countries captive to its demands.

He called the OBOR “a plan to develop a series of trade routes leading to and from China, with the ultimate goal of advancing Chinese global dominance.”

In addition to the escalation of rhetoric, the administration has enacted a series of policies to tackle OBOR. For example, in October, Congress passed the Better Utilization of Investments Leading to Development Act, or Build Act, with bipartisan support. It was signed into law by Trump.

According to Kliman, the bill is “a potential game-changer in terms of U.S. resourcing.”

In addition, the House and Senate this month passed the bipartisan Asia Reassurance Initiative Act, or ARIA, which authorizes $1.5 billion annually for five years in national-defense spending in order to counter Chinese influence in the Indo-Pacific.

The United States has also launched a coordinated response to Chinese-backed investments, cooperating with allies in the region, such as Japan, Australia, and New Zealand. For example, America and its Pacific allies announced last month that they would build a $1.7 billion electricity grid in Papua New Guinea.

European Union recently also unveiled a new strategy for connecting Europe and Asia. Although Brussels claims that it isn’t competing with OBOR, it is a very much an alternative, says Kliman.

“So there are opportunities today for the United States to engage with Europe on the joint infrastructure projects.”

According to Kliman, there are also efforts to constrain Chinese investment in developing countries.

“For example the United States, this summer, unveiled a new transaction advisory fund. Essentially, it would help countries evaluate potential Chinese deals and not be taken advantage of in the way that happened in Sri Lanka,” he said.

Sri Lanka, unable to repay its mounting debt to China, had to hand over its Hambantota Port to Beijing last year, in a controversial 99-year lease agreement.

Kliman also said the United States would support investigative journalists in countries where China has invested, making it harder for Beijing to cut backroom deals that leave nations burdened with debt and put their sovereignty at risk.