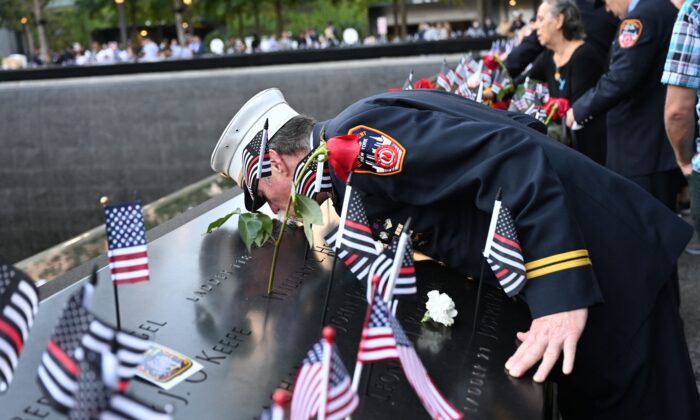 Retired Paramedic Chief Charlie Wells kisses the name of a relative killed in the attack on the World Trade Center at the National 9/11 Memorial & Museum during a ceremony commemorating the 20th anniversary of the 9/11 attacks in New York on Sept. 11, 2021. (David Handschuh/AFP/Getty Images)
US News

Americans across the country came together on Sept. 11 to commemorate the 20th anniversary of the 9/11 terror attacks, which killed nearly 3,000 people, wounded thousands more, and left an indelible scar on the nation’s psyche.

Observances were planned across the country—from a wreath-laying in Portland, Maine, to flags flying at half-staff at the Washington Monument—marked by a sea of statues, 9/11 plaques, and sorrowful Americans vowing never to forget the deadliest act of terrorism on U.S. soil.

A ceremony at ground zero in New York got underway with a first responder striking a silver bell at 8:46 a.m., the exact time that the first of two hijacked planes crashed into one of the World Trade Center’s twin towers.

“It felt like an evil specter had descended on our world, but it was also a time when many people acted above and beyond the ordinary,” said Mike Low, whose daughter, Sara Low, was a flight attendant on that plane.

“As we carry these 20 years forward, I find sustenance in a continuing appreciation for all of those who rose to be more than ordinary people.”

In attendance at the ceremony were President Joe Biden and former presidents Barack Obama and Bill Clinton.

Relatives then read aloud the names of the 2,977 victims who died in the World Trade Center attack, and later Bruce Springsteen gave a heart-wrenching performance of “I’ll See You in My Dreams.”

In line with tradition, no politicians spoke at the ground zero ceremony in Manhattan, where buildings will be illuminated in blue and, at sunset, twin beams will project four miles into the sky to mirror the fallen towers.

“During this 20th anniversary year, we will share the history and lessons learned with a new generation, teach them about the ongoing repercussions of the 9/11 attacks, and inspire the world with memories of our fortitude, strength, and resilience,” the 9/11 Memorial & Museum wrote in a special section on its website dedicated to the 20th-anniversary commemorations.

While many of the large events were happening in and around New York, people across the country planned events to remember those who died and to educate the public.

In Shanksville, Pennsylvania, family and guests gathered at the National Memorial there to honor the 40 people killed when United Airlines Flight 93 crashed into a field. According to the 9/11 Commission Report (pdf), the actions of the passengers who confronted the plane’s hijackers ultimately led to the aircraft plummeting into an empty field in rural Pennsylvania instead of hitting its intended target, likely the White House or the U.S. Capitol. Their courage and sacrifice almost certainly saved the lives of others.

Former President George W. Bush, who took office eight months before the attacks, was among those to speak at the ceremony.

“In these memories, the passengers and crew of Flight 93 must always have an honored place. Here the intended targets became the instruments of rescue. And many who are now alive owe a vast, unconscious debt to the defiance displayed in the skies above this field,” Bush said.

“In those fateful hours, we learned other lessons as well. We saw that Americans were vulnerable, but not fragile—that they possess a core of strength that survives the worst that life can bring. We learned that bravery is more common than we imagined, emerging with sudden splendor in the face of death.”

Calvin Wilson, whose brother-in-law LeRoy Homer died aboard Flight 93, spoke ahead of the ceremony.

A commemorative ceremony was also held in Arlington, Virginia, where another hijacked plane—American Airlines Flight 77—slammed into the Pentagon on Sept. 11, 2001, killing 125 people in the building and 59 passengers and crew aboard the plane.

Chairman of the Joint Chiefs of Staff Mark Milley honored the victims at the ceremony.

“All of the values and principles embedded in our Constitution and made real in our daily lives were paid for with the blood of the fallen on this place at 9:37 on Sept. 11, 2001,” Milley said at the ceremony, according to the New York Post. “Those ideals were and still are hated by our enemies: the fascists, the Nazis, the communists, al-Qaeda, ISIS, the Taliban, authoritarians, dictators, and tyrants of all kinds. They hate those ideals. They hate those values.”

Secretary of Defense Lloyd Austin also spoke at the ceremony outside the Pentagon.

“It is our responsibility to remember. And it is our duty to defend our democracy,” Austin said, according to The Associated Press. “We still work here. We still remember here. We still uphold our values here. With clear heads and fearless hearts.”

Many other commemorative ceremonies were held across the country, with Fox News citing the 9/11 Memorial & Museum’s registry as counting at least 1,190 ceremonies taking place in the United States.

Other events included a 9/11 Memorial 5K Run and fundraiser jointly organized by Arlington’s police and fire departments, the Sheriff’s Office, and the Emergency Communications Center; a Missouri Fire Marshal 9/11 Memorial Stair Climb, which was underway at the time of reporting; and a 9/11 Flags of Honor Across America Memorial ceremony in Arizona.

While 9/11 remembrances have become an annual tradition, this Sept. 11 had special significance, coming 20 years after the morning that many view as a turning point in U.S. history.