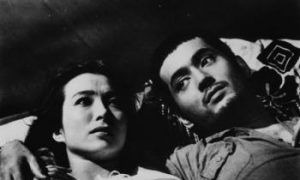 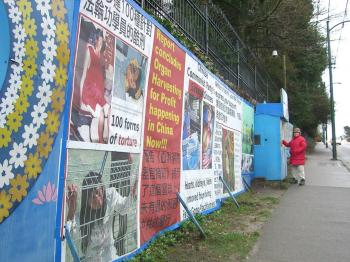 A Falun Gong practitioner stands outside the shelter that the City of Vancouver said violated a bylaw. A city bylaw prohibiting the protest signs and hut of the group in front of the Chinese consulate in Vancouver has been struck down as unconstitutional by the B.C. Court of Appeal. (Helena Zhu/The Epoch Times)
Canada

Print
After intense public criticism the City of Vancouver posted amendments to its "Public Expression" bylaw on Thursday, but some say it still has a long way to go.

At first glance, the bylaw appears to have improved: exceptions were made to allow structured protests in front of consulates, the mandatory traffic management plan was removed, and structures were allowed to remain unattended at times.

The city’s department of engineering says it is “precedent-setting” in North America and “is designed to specifically enable and facilitate the use of structures on City streets for the purpose of political expression.”

But Clive Ansley, legal counsel for the Falun Gong, said the amended bylaw is a way to distract the public from serious underlying flaws while continuing to appease the Chinese consulate.

“The fact is that the Vancouver City Council, at every stage since launching its petition against the Falun Gong protest, right up to the present moment, has spared no effort to safeguard the interests of the Consulate-General, and to frustrate the free expression of the Canadians maintaining the protest outside the Consulate-General,” he wrote in a statement.

Upon closer inspection, the amended bylaw retains similar restrictions that were heavily criticized from the beginning: structures must be taken down daily between 8 p.m. and 8 a.m. The structure size, which was previously considered safe, was ordered to be reduced to half of its original size when placed in front of a consulate.

The structure targeted by the bylaw are signs and a small hut the Falun Gong built in front of the Chinese consulate to allow a silent 24-hour, meditative vigil, protesting the murder of their fellow practitioners in China.

The amended bylaw leaves heavy restrictions on this hut, and therefore the Falun Gong’s ability to protest. Many of the protesters are elderly women who can only participate through the protection of the hut, which contains a small heater to ward off Vancouver’s damp chill. The new rules say the hut must be removed every 12 hours, making it virtually impossible for the Falun Gong to sustain their previous round-the-clock vigil.

“This requirement serves no purpose but to make it unlikely that the elderly protesters who maintain the vigil will be capable of continuing it,” said Ansley.

“In short the City still seeks to impose punitive, grossly restrictive, arbitrary, and totally illogical constraints designed for no purpose but to assure the Consulate-General that any attempted protest in its area will be completely ineffective.”

The structure would also only be allowed for a maximum of 30 consecutive days, with a following 30-day “reprieve.” The previous $200 application fee and $1,000 damage deposit have been removed, but replaced with a $1,000-$5,000 fine for any violations.

The Falun Gong started their protest in front of the consulate in 2001 to raise awareness of escalating state-sponsored genocide against practitioners in China. The city ordered an injunction to have the 24-hour protest removed in 2009 claiming a bylaw infraction, but in 2010 the BC Court of Appeal ordered the city’s forced removal unconstitutional.

The court also ruled that the billboards and the hut were an integral part of the Falun Gong’s political expression under the charter of Rights and Freedoms. It acknowledged that the crimes against humanity the Falun Gong were protesting were well documented by the United Nations, Amnesty International, and top Chinese communist officials charged with genocide against Falun Gong in an Argentinian court.

Controversy was fuelled last week regarding the city’s bowing to consulate pressure after city staff admitted to “confidential” meetings with the Chinese consulate, to get “some degree of feedback” on the proposed bylaw. The initial injunction by former Mayor Sam Sullivan to remove the protest was also suspected to be caused by pressure from the consulate after Sullivan was seduced by the Chinese Communist Party on a business trip to Beijing.

Micheal Vonn, policy director for the BC Civil Liberties Association, said the amended bylaw has some small improvements but is “not even close” to being acceptable.

“We have some good things to point to but we don’t want those improvements to essentially camouflage for what continues to be a deeply flawed piece of legislation,” she said. “We absolutely do not support it.”

Vonn said if the city does not bring the bylaw up to standard it will soon be facing another court challenge.

“If the bylaw as its currently proposed is not amended in ways that meet what we believe to be charter scrutiny, then we will undoubtedly be either initiating or joining another party in a court challenge.”

Vonn said the city’s late minute introduction of the bylaw and subsequent rushed amendments raise questions about the hurry to meet the “arbitrary” April 19 deadline.

“If you have a feasible means to do this right in the first place and collect more input from important stakeholders, what’s the hurry?” she asked.