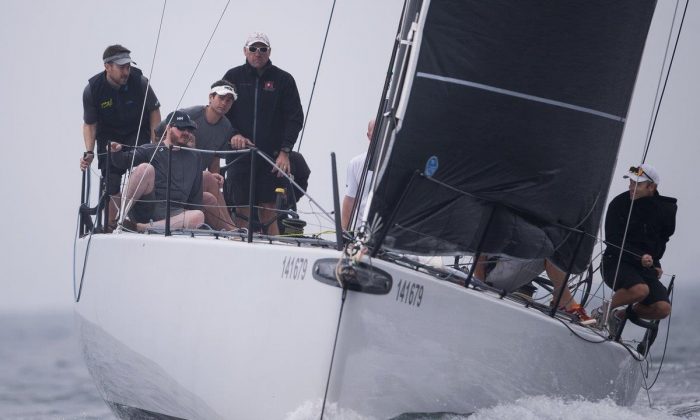 HONG KONG—The fourth and final pursuit race of the RHKYC’s 2015-16 Top Dog Series the HKRNVR Memorial Vase was held on Saturday April 30 with 6 to 8 knot winds to take the boats out of Victoria Harbour.

The course continued through Lei Yue Mun Gap to the Shek O Rock and returning to a finish line at the Easter approaches to Victoria Harbour. Classes start at different times according to their internal RHKYC RHKATI rating. Given perfect conditions, boats in top condition with sailing skills to match, all boats should finish at the same time. Of course this does not happen but it should give a good opportunity for sailors in each class to the reach the finish first.

However, Etchells and Flying Fifteens often seem to be near the top, Ruffian’s also do well, big boats tend to be down the order and Magic 25’s quite often struggle to post good results.

However on this occasion Big Boat “Ambush” helmed by Joachim Isler and Andrew Taylor were first across the line followed by Steve Bourne and Crew in Magic 25, “Merlin”, thereby disproving the considered norm. There will be lots of discussions as to why this happened.  However, “Jezebel”, the Etchells of Peter Backe and Anthony Day came 3rd and the Flying 15 “Full Power” of Sam Chan and Nick Atkinson came 4th with Big Boat “Dexter II” 5th.

The leading results of the Top Dog Series which combines the results of the Lipton Trophy, Around the Island Race, Tomes Cup as well as the HKRNVR, saw the Backe/Day combination with Etchells “Jezebel” clear winners with 10 points; Flying 15, “Full Power” of Sam Chan came second on 18 points; Flying 15 “Tchaikoffsky” of Howard/Joyce came 3rd with (28 points) and “Ambush” 4th with 31 points. The other top ten places were taken by “Buster” (Ruffian), “Gambit” (Big Boat), “Taxi” (Impala), “Victory 9” (Ruffian), “Scallywag” (Ruffian) and Impala “Caviar”.

Taylor also won with “Ambush” sailing under the Kiwi Flag on Sunday May 1 in the Nations Cup narrowly beating the German flagged “das Busch” helmed by his “Ambush” partner Isler. Isler took line honours but Taylor won on corrected time.