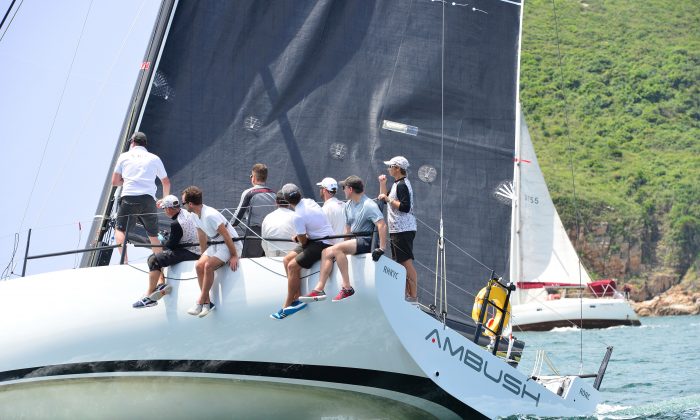 With a southerly wind blowing a steady 7-10knts it was comfortable sailing for most of the race which took different routes to cater for the speed of participating crafts. The race started inside Port Shelter for all boats and rounded a windward Club Mark before heading for the islands.

The majority of boats IRC-B to D, HKPN-A, Sports Boats and J80’s raced 16 nautical miles via islands Table, Steep and Bluff and taking in the Bay Mark before returning to Table before finishing off Little Palm Beach (LPB). The big boats, IRC-A division initially rounded Trio instead of Steep, and included an additional – Bluff, North Nine Pin – loop in their 22 NM race. The slower boats HKPN-B missed out the Steep section travelling a shorter 8 NM course round Table to the Bay Mark and back to Table before finishing at LPB.

IRC Divisions
The new Marcel Liedts racer “Zannekin” showed her speed from the start, heading the IRC-A fleet out of Port Shelter and continued in this position right through the race finishing the 22 NM race 4-minutes ahead of the new “Ambush” of Joachim Isler and Drew Taylor. But on corrected time “Ambush” took 1st place with “Zannekin” second. The final order of the other IRC-A boats was “Signal 8”, “Vineta”, “Straight Up” and “Surfdude”.

In IRC-B, “Lighthorse”, with a clear 11-minute advantage in elapsed time and 8-minutes on corrected time over the nearest competitor “Stella”, looks like she may be in the wrong division. “Lighthorse”, a Beneteau First 50 has improved competitiveness considerably since commencing sailing in Hong Kong waters more than a year ago and in this division is lining up against 40 footers or below. In this first race of the series “Outrageous” came 3rd and last year’s IRC-B division winner “Mojito” was 4th.

In IRC-C, “Dexter II” came first followed by “Geabox”, then “Vixen”. “Ymir” and “Ding Dong” are newcomers to the Typhoon Series so may take a race or two to show their form. In IRC-D only 3-boats participated with “Goddess” winning, “Moll” 2nd and “Lady Butterfly” 3rd on corrected time.

HKPN Divisions
HKPN-A Division is one of the largest (11 competitors) and most competitive groups. “Sell Side Dream” finished about 1-minute ahead of “Kiasu”. “No One Else” and “Bits & Pieces” finished just a couple on minutes further back. In total 7-boats finished within 5-minutes of the leader.

In the HKPN-B Division, “Pepper & Salt” headed the fleet with line honours and 1st place on corrected time from “Windseeker” and “Yilong” (a new entrant from Shen Zhen). “Elite 99”, “Simplicity” and “Gecko” took the next three places, but some of the later finishers in this division “Sleepy Piggy”, “White Dragon” and “Scrumpy” although not very competitive on time added character and colour to the sailing.

J80 and Sportsboat Divisions were low on numbers with just 4-boats in each division.

“Footloose” took 1st place in the J80’s followed by “Jazz” (CN Sailing Club), “Bumphead”, and “Jive” (Danny Sum). “Jazz” and “Jive” are boats owned by Hebe Haven and booked for a race series by individual people or entities.

“Merlin” won the Sportsboat Division followed closely by “Good Vibrations” with “Sidewinder” 3rd. “Brace Brace Brace” although completing the course in style was excluded for not getting SMS paperwork completed prior to the race.