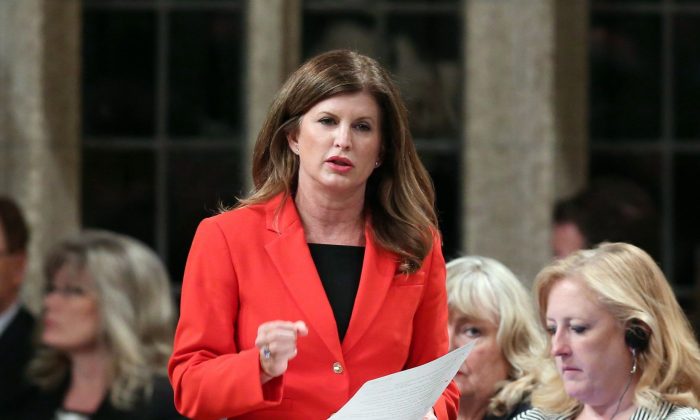 Health Minister Rona Ambrose speaks during question period in the House of Commons on June 11, 2015. Ambrose is calling on the provinces and territories to co-operate with the feds to help slash the cost of prescription drugs. (The Canadian Press/Fred Chartrand)
Canada

OTTAWA—Health Minister Rona Ambrose has penned a sharply-worded letter calling for the provinces and territories to co-operate with the feds to help slash the cost of prescription drugs.

In a note sent to provincial and territorial health ministers, and obtained by The Canadian Press, Ambrose says the federal government has “repeatedly expressed interest” in participating in the Pan-Canadian Pharmaceutical Alliance.

The minister’s message is designed to apply pressure ahead of the Council of the Federation meeting of premiers, which began Wednesday, July 15, in St. John’s.

“In the lead-up to the Council of the Federation meetings … I urge you to please encourage your premier to accept the federal government’s request to join this very successful initiative,” Ambrose said.

The Pan-Canadian Pharmaceutical Alliance was formed by the provinces and territories in 2010 to co-ordinate bulk buying and reduce costs for publicly funded drug programs.

The real problem with our system in Canada is that the public programs aren’t extensive enough.
— Steve Morgan, UBC School of Population & Public Health

Ambrose said this system has been effective, but Canadians continue to pay some of the “highest costs for prescription drugs in the world.”

“In fact, I believe that when it comes to the cost of prescription drugs, Canadians are being ripped off,” she said.

Ambrose said there would be benefits to bringing the federal government’s “buying leverage and expertise” to the bargaining table.

The federal government is one of the biggest buyers of prescription drugs in Canada, as it helps supply medications to the prison population, soldiers and veterans, and First Nations.

But the proper government role in prescription-drug programs has often been a source of friction between Ottawa and the provinces.

Provincial health ministers have been applying their own form of pressure on Ottawa to unveil a national pharmacare program.

Ontario Minister of Health Eric Hoskins, a family doctor, held a roundtable on the issue last month with provincial and territorial ministers, along with academics, and other pharmacare experts.

The federal government did not accept an invitation to attend.

“I think we have an opportunity given that this is an election year federally, to put and keep this issue on the agenda,” Hoskins said at the time.

All countries with universal health insurance systems also provide universal coverage of prescription drugs, with the exception of Canada.

Steve Morgan, one of the study’s authors and a professor at the UBC School of Population and Public Health, said it is not enough for the federal government to join the existing pharmaceutical alliance.

“The real problem with our system in Canada is that the public programs aren’t extensive enough,” Morgan said in a phone interview. “I don’t mean that every drug needs to be covered by every public program, but every Canadian needs to have coverage for essential medicines.”

Morgan said having the feds join the Pan-Canadian Pharmaceutical Alliance would simply add to the negotiations underway in the existing drug benefit structure rather than lead to reform.

“We need reform in the structure of those benefits,” Morgan said. “Doctors are saying it is time that we fill this prescription, so to speak, because their patients are having difficulty getting the medicines that they feel their patients need.”

A new study released Wednesday by Angus Reid, which Morgan also contributed to, found a “significant” number of Canadians—more than one-in-five—are unable to pay for medications and they are compensating by skipping doses, splitting pills, or not filling prescriptions at all.

An overwhelming majority of respondents (91 percent) expressed support for the concept of a national pharmacare program that would provide universal access to prescription drugs.

However, most of those surveyed indicated opposition to funding such a program via a GST or income tax hike or through premiums, preferring to go with increased corporate taxes. Sixty-one percent also agreed with the argument that “no matter what the research says, a national pharmacare plan will end up costing taxpayers lots of money.”

The Angus Reid Institute conducted their research based on an online survey of 1,556 Canadian adults from July 2 to 6.