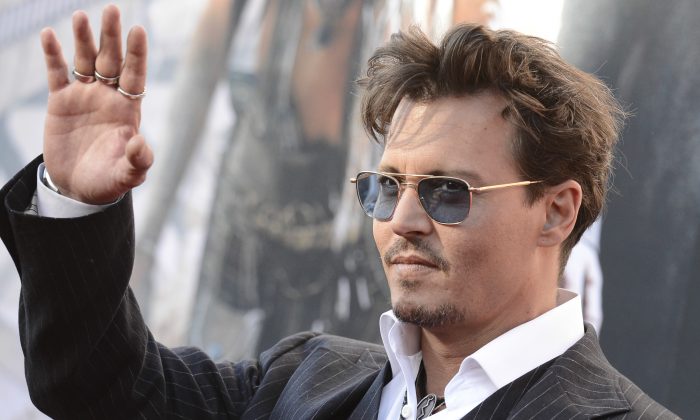 Another says Depp might head to rehab
By Jack Phillips

Depp seemed visibly intoxicated when he gave an introduction speech for Shep Gordon, the subject of a documentary Supermensch: The Legend of Shep Gordon, which won the ceremony’s Hollywood Documentary Award.

Depp slurred his words and a cursed a few times before he was cut off (the video can be seen here).

Meanwhile, Heard and Depp got engaged earlier this year, and there’s been reports saying they want to get married by the end of 2014.

According to Celeb Dirty Laundry–which should be taken with a grain of salt–Heard wasn’t happy with Depp’s speech, and claims that “rumor has it that Amber and Johnny’s wedding is off,” although that seems rather unlikely.

But it appears that Depp might be having problems with his drinking, as an alleged source close to the matter also spoke with Star magazine in its Dec. 1 edition about the couple’s troubles.

“Amber couldn’t believe he had made such a fool out of himself. This reflects really badly on her, and she’s not happy about it. There’s a chatter in Johnny’s camp about rehab. At this point he is driving everyone away – including Amber,” the source said.

Last year, Depp spoke with Rolling Stone magazine about quitting drinking–although he denied being an alcoholic. During the interview, Depp said that he was sober for about 18 months.

“I investigated wine and spirits thoroughly, and they certainly investigated me as well, and we found out that we got along beautifully, but maybe too well,” he said.

He continued: “I don’t have the physical need for the drug alcohol. No, it’s more my medication, my self-medication over the years just to calm the circus. Once the circus kicks in, the festivities in the brain, it can be ruthless.”

“I just decided that I pretty much got everything I could get out of it,” he said.