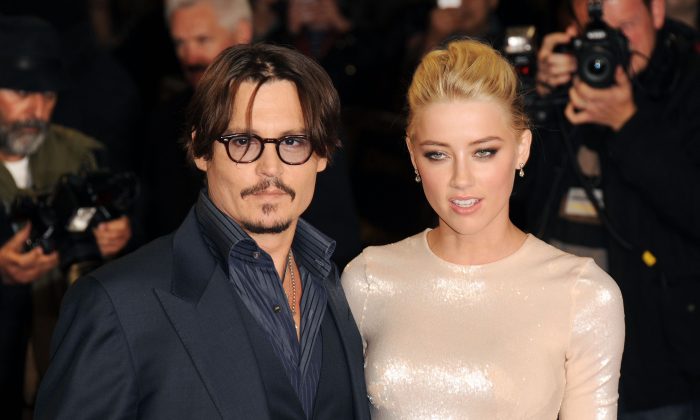 Johnny Depp and Amber Heard attend The UK Premiere of 'The Rum Diary' at on November 3, 2011 in London, England. (Stuart Wilson/Getty Images)
Entertainment

Stanhope wrote last week that Heard had manipulated Depp for years, and that Heard had blackmailed him with threats of going to the press with allegations of abuse.

“Amber was now going to leave him, threatening to lie about him publicly in any and every possible duplicitous way if he didn’t agree to her terms,” Stanhope wrote.

Heard has accused of Depp of domestic violence and bore bruises on the right side of her face when she was in court last week.

Representatives for Depp say that Heard is faking her abuse to gain favorable terms in the divorce proceedings. Heard has asked for $50,000 per month in spousal support, as well as access to their downtown L.A. home.

“Stanhope is a close friend of Johnny Depp and, as part of a coordinated effort, wrote a highly defamatory article about Ms. Heard, filled with completely false, highly defamatory and very hurtful statements,” said Heard’s attorney, Charles Harder, according to the Hollywood Reporter.

Depp’s former partners have come in defense of the actor, calling the accusations by Heard outrageous and out of character with the person they knew.

“In all the years I have known Johnny, he has never been physically abusive with me and this looks nothing like the man I lived with for 14 wonderful years,” Vanessa Paradis wrote, in a letter published by TMZ.

Paradis had dated Depp for 14 years, and they have two children together.

Depp’s first wife, whom he married in 1983, also came to his defense.

Heard claims that the domestic violence had been ongoing for years, and that the breaking point was after Depp’s mother died earlier this year.