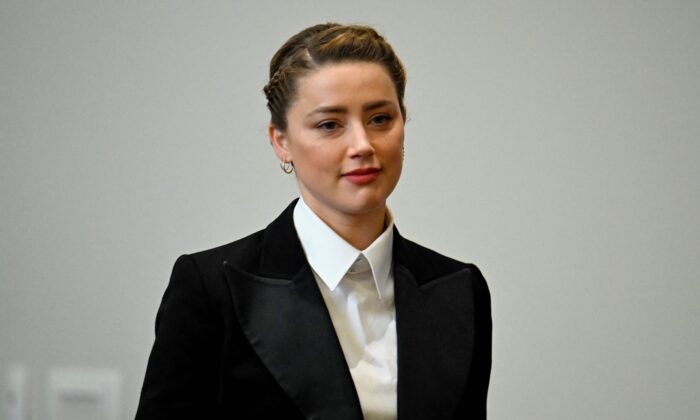 Actress Amber Heard arrives in the courtroom at the Fairfax County Circuit Court in Fairfax, Va., on May 3, 2022. (Jim Watson/POOL/AFP via Getty Images)
Entertainment News

Amber Heard insisted she “absolutely” still feels love for her ex-husband, Johnny Depp, despite destroying his reputation by repeating claims that the Golden Globe-winning actor abused her.

Speaking in the latest installment of Heard’s first post-trial interview, the 36-year-old told NBC Today host Savannah Guthrie that she still loves Depp even after being ordered to pay the 59-year-old “Pirates of the Caribbean” star millions of dollars in damages when a Virginia jury reached a verdict in early June concluding the actress defamed her ex-husband by writing a 2018 opinion article for the Washington Post.

Guthrie asked Heard if, after everything that happened recently, she “still has love” for Depp, pointing out a statement Heard issued on the first day of the trial, in which the actress said she still loves him.

“Yes … Absolutely. Absolutely, I love him,” Heard responded. “I loved him with all my heart and I tried the best I could to make a deeply broken relationship work. And, I couldn’t.”

“I have no bad feelings or ill will toward him at all,” she added. “I know that might be hard to understand or it might be really easy to understand if you’ve just ever loved anyone.”

Guthrie also brought up a text message in which Depp warned Heard that she would suffer “total global humiliation” if she pressed ahead with the abuse allegations. The show’s host asked Heard if she thought that came true.

“I know he promised it,” she said emotionally. “I testified to this. I’m not a good victim, I get it, I’m not a likable victim, I’m not a perfect victim. But when I testified I asked the jury to see me as human and hear his own words, which is a promise to do this. It feels as though he has.”

Heard was also asked why she decided to write the 2018 op-ed for the Washington Post, alluding to being the victim of past abuse two years after her divorce settlement.

“The op-ed wasn’t about my relationship with Johnny,” she insisted. “What the op-ed was about was me loaning my voice to a bigger cultural conversation that we were having at the time.”

Heard further clarified that it was important for her that the op-ed, which was at the heart of the six-week trial, wouldn’t be about Depp, or do anything like defame him.

“I had lawyers, teams of lawyers, review all the drafts of this,” she said of the article that a seven-person jury in Virginia unanimously ruled had defamed her ex-husband.

Meanwhile, Heard admitted that she’s afraid of potentially being sued again by her ex-husband.

“I’m scared that no matter what I do, no matter what I say or how I say it, every step that I take will present another opportunity for this sort of silencing,” she said in response to Guthrie asking if she is concerned Depp could sue her again.

Asked about what she’ll do now nearly two weeks after the highly-publicized defamation trial has ended, Heard said she’ll “get to be a mom” full-time, where she doesn’t have “to juggle calls with lawyers.”

When Guthrie asked Heard if she wanted Depp to be one of the “legions of powerful men being canceled,” she insisted: “Of course not. Of course not. It wasn’t about him.”

In favor of Depp, the jury awarded compensatory damages of $10 million and punitive damages of $5 million—which was reduced by Judge Penney Azcarate to Virginia’s $350,000 statutory cap. They also ruled that Depp has to pay $2 million to Heard in favor of a counterclaim Heard had filed after Depp’s lawyer called her abuse allegations a hoax.

Depp had sued Heard for $50 million in damages over the op-ed in which Heard claimed she had become a “public figure representing domestic abuse,” without mentioning Depp by name. Heard countersued Depp for $100 million.

The trial drew numerous international headlines and included lurid details of the celebrities’ short and volatile marriage. Heard testified that Depp physically or sexually assaulted her more than a dozen times. Depp said that he never struck Heard, that she concocted the abuse allegations, and that she was the one who physically attacked him, multiple times.

After the verdict, Depp released a statement saying his life, his children’s lives, and everyone close to him were “forever changed … in the blink of an eye” by the allegations made against him.

“From the very beginning, the goal of bringing this case was to reveal the truth, regardless of the outcome,” Depp said. “Speaking the truth was something that I owed to my children and to all those who have remained steadfast in their support of me. I feel at peace knowing I have finally accomplished that.”

Heard wrote in a statement moments after she left the verdict’s reading that she is “heartbroken that the mountain of evidence still was not enough to stand up to the disproportionate power, influence, and sway of my ex-husband.”