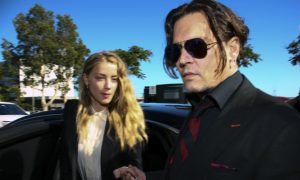 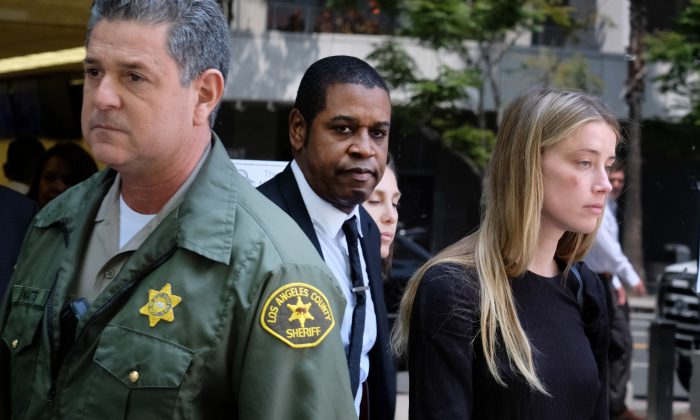 Actress Amber Heard leaves Los Angeles Superior Court court on Friday, May 27, 2016, after giving a sworn declaration that her husband Johnny Depp threw her cellphone at her during a fight. (AP Photo/Richard Vogel)
Entertainment

Amber Heard was granted a temporary restraining order against her soon-to-be ex-husband, Johnny Depp, according to TMZ.

“The judge just granted a temporary restraining order, requiring Johnny to stay 100 yards away from Amber, at least until a hearing next month,” according to the celebrity news website.

Depp is currently out of the country touring with his band, Hollywood Vampires.

Heard reportedly appeared in court on Friday, May 27, with a bruised face—a result of Depp slamming an iPhone into her face on Saturday night. According to sources, physical abuse by Depp was a common occurrence throughout the couple’s short marriage.

TMZ is also reporting that during the alleged May 21 attack, “Johnny shattered various objects in the apartment. She says she was on the phone with a friend during the fight, and when Johnny grabbed her phone, she screamed to her friend, ‘Call the cops!’ The friend called 911 and cops came to the residence.”

The 30-year-old actress claims the “Pirates of the Caribbean” actor abuse of drugs and alcohol are partly to blame for his violent outbursts.

TMZ reported: “She says he was drunk and high again and they were talking about his mom’s passing the day before. She says he ‘suddenly began obsessing’ about something, got mad, grabbed the phone, ‘wound up his arm like a baseball pitcher and threw the cell phone at me striking my cheek and eye.'”

Once police arrived, Depp allegedly was nowhere to be found and Heard refused to file a report. According to TMZ, Heard wasn’t battered when police officers arrived on the scene.

“They saw no injury at all. In fact, we’re told she never alleged any brutality … just that they had an argument,” said the source. “The LAPD says they had no reason to believe Johnny Depp struck Amber Heard with his phone when they were called to the couple’s apartment.”

During today’s court proceedings, Heard requested their house, the Range Rover, the two dogs—Pistols and Boo—spousal support, and attorney fees. The judge denied her requests of spousal support of $50,000 per month, attorney fees, the Range Rover and an order to force Depp into anger management classes. Additionally, the judge said “no to an order keeping Johnny away from at least one of their dogs, saying there was ‘an insufficient showing to protect the pet dog.'”

Heard was granted the right to live in the marital home.

Depp has denied any claims of abuse, with sources close to Depp, “calling BS, saying Amber ‘is an affront to real victims of domestic violence’.”