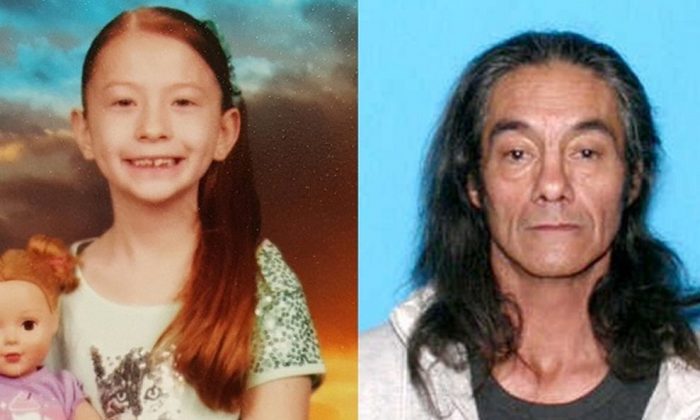 An AMBER Alert was issued for a 7-year-old girl who was reportedly abducted in Michigan.

The girl, Sapphire Palmer, was taken from Brighton by her mentally ill mother who is with a registered sex offender, 64-year-old Douglas Steven Stanko. He has two convictions for second-degree criminal sexual conduct.

According to the Livingston Daily, the mother, Amanda Hayward, 30, might be armed with a handgun.

The AMBER Alert says Hayward “s paranoid, delusional and may be armed” with a gun police say she recently had purchased.

“From what I’ve seen (Stanko) is a nice person,” Hayward’s father, Darryl Joseph Hayward, told the paper. “I’ve known him off and of probably a few years. I met him through Amanda.”

Darryl Hayward said he saw his daughter last at around 3 a.m. on Tuesday, May 10, with her daughter. He said that she might have been having a “paranoid episode,” as he thinks she was “mixing alcohol and medication.”

“I heard her pounding on something in the middle of the night and I got up to investigate,” he added. “I asked her what she was doing. She said people are bugging her house and putting cameras in it.”

They live in the area of Chilson and Bishop Lake Road in Hamburg Township, south of Brighton in Livingston County.

Anyone with information about the disappearance is asked to call 911 immediately.

According to CBS Detroit:

The trio may be traveling in a red 2001 Ford Escape belonging to Stanko, with Michigan license plate: 2HVA18.

Sapphire has long red hair, green eyes and weighs about 55 lbs. She was last seen wearing a purple nightgown.