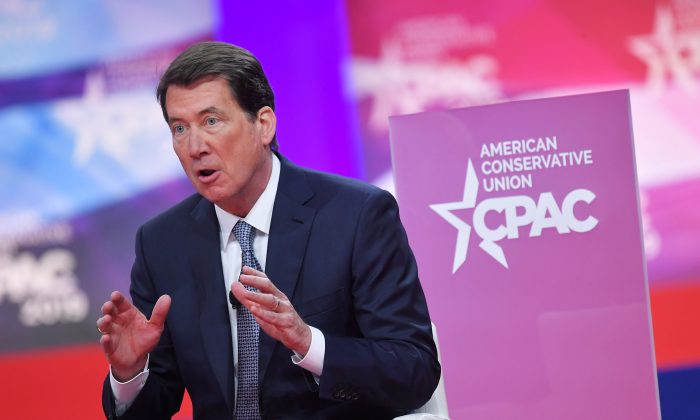 Ambassador to Japan Bill Hagerty to Run for Senate in Tennessee, Gets Trump Endorsement

“Tennessee loving Bill Hagerty, who was my Tennessee Victory Chair and is now the very outstanding Ambassador to Japan, will be running for the U.S. Senate,” Trump said on Twitter.

“He is strong on crime, borders & our 2nd A. Loves our Military & our Vets. Has my Complete & Total Endorsement!”

The seat is being vacated by Sen. Lamar Alexander (R-Tenn.), who announced in December 2018 he would be stepping down at the end of his term.

Tennessee loving Bill Hagerty, who was my Tennessee Victoy Chair and is now the very outstanding Ambassador to Japan, will be running for the U.S. Senate. He is strong on crime, borders & our 2nd A. Loves our Military & our Vets. Has my Complete & Total Endorsement!

Hagerty was sworn in as ambassador in 2017 and has been one of the key players in trade talks with Japan, one of the strongest U.S. allies in Asia.

According to the Tennessean, Hagerty’s campaign will likely be headed by Ward Baker, who ran the successful campaign for Sen. Marsha Blackburn (R-Tenn.) in 2018.

If Hagerty does run, he must resign from his ambassadorship before officially entering the race. That process is already underway, the outlet reported.

Tennessee is a red state that often elects Republicans to statewide office and the seat is classified in various race ratings as “solid Republican,” “safe Republican,” and “likely Republican.” Alexander won the 2014 election by more than 400,000 votes.

The only Democratic candidate who has announced a run is James Mackler, a former prosecutor and defense attorney.

Former Tennessee Gov. Bill Haslam and Rep. Mark Green (R-Tenn.) are among those who have stated publicly that they will not run.

Haslam, who left office in January, said in an op-ed: “I have come to the conclusion that it is not my calling for the next period of my life.”

“This is a difficult decision because I have loved my time in public service and I believe so deeply in the importance of our political process. I remain grateful for everyone who has allowed me to serve as a mayor and a governor and I look forward to serving our state and country in other ways,” he added.

Rep. David Kustoff (R-Tenn.) issued a statement about the Senate race on July 11, saying, “Governor Haslam’s career of public service is an honorable one, and I am grateful for all he has done for our state.”

My statement on the US Senate race: pic.twitter.com/08vMFDpVwD

“Tennessee is home to some of our country’s best agriculture, manufacturing, and tourism and we need a senator who is willing to work with President Trump to help these industries thrive. It is vital that Tennessee has a senator that knows and deeply cares about the state and its people. I’ve been approached by folks from all across Tennessee encouraging me to run and I look forward to continuing to talk to the people about how to best continue serving our great state,” he added.

The candidate filing deadline for the seat is April 2, 2020; the primary election will be on Aug. 6 next year, with the general election on Nov. 3.