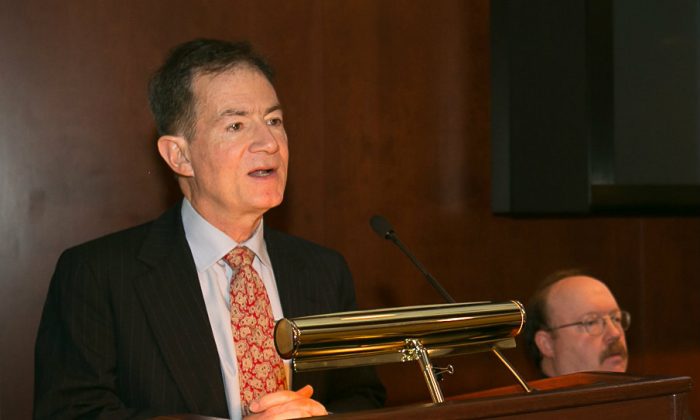 Ambassador Rees: The Rohrabacher That I Know

While President-elect Donald Trump was saying that he would announce the highest profile cabinet position, Secretary of State, very soon, it may eventually rest on two important factors: Trump’s instinct and the candidate’s strong qualifications.

Being a strong backer of Trump from the early stage of the campaign, Congressman Dana Rohrabacher (R-CA) has recently stood out as a possible “dark horse,” now that possible candidates beyond the four front runners—Mitt Romney, Rudy Giuliani, David H. Petraeus and John Bolton—have been considered.

As one of the senior speechwriters for President Ronald Reagan, Rohrabacher has the experience on the front lines to fight for freedom and against tyrannical governments, such as fighting for the Afghan people in the 80’s and supporting the Chinese people’s pursuit of freedom for decades.

He is also chairman of the Europe and Emerging Threats Subcommittee and a senior member of the International Relations Committee.

In his decades of political services, Rohrabacher has crossed paths with Grover Rees, III, former U.S. Ambassador to the Democratic Republic of East Timor.

Ambassador Rees has worked in a variety of capacities representing the United States and assisting members of US Congress. As the staff director and chief counsel of the subcommittee on International Operations and Human Rights in 1995, Ambassador Rees worked on the drafting and enactment of the International Religious Freedom Act, the Trafficking Victims Protection Act, and other legislation that has helped to bring U.S. foreign policy into closer alignment with values predicated in the US Constitution.

For Rees, Rohrabacher’s experiences should help him as the nation’s top diplomat.

Rees got to know Rohrabacher in the 90’s when he was working for the House International Relations Committee.

“He was a member of the committee. We traveled together once or twice,” Rees said. “I saw him negotiating before governments and so forth. Also, of course, I observed his voting records.”

To Rees, in those days there were two bi-partisan coalitions on the issue of human rights and foreign policy, and he thinks they still exist today.

“One coalition, made up of Democrats and Republicans think that, ‘Well, if you want human rights, you have to treat these governments well,” said Rees. “You have to treat them as our partners, give them respect and do not lecture them. Then eventually they will come around and they will be people like us. They will respect human rights. They will respect the rights of their neighbors and be a less a threat of the world.'”

The other coalition, according to Rees, which also includes both Republicans and Democrats, has a very different view. Congress Members Chris Smith (R-NJ) and Nancy Pelosi (D-CA) fall into this category.

“They believe if we were going to give things to these bad governments … we ought to get something—not just copyrights and pharmaceuticals, but about human rights. They were very much in favor of linking, for instance, Most Favorable Nations Status with China, to China behaving in a minimum decent way with respect to their own people,” said Rees.

Speaking of values and ideals, President Reagan once said, “An America that is militarily and economically strong is not enough. The world must see an America that is morally strong with a creed and a vision. This is what has led us to dare and achieve. For us, values count.”

Rees believes Rohrabacher has genuinely reflected those values for decades. “[With] respect to Congressman Rohrobacher’s support for human rights in the past, I think, in general, that is going to build respect for the Unites States.

“Some people are not going to like it. I worked in the United Nations general assembly. Even if we were trying to mention that there is rape in Burma that the Burmese government military was using rape as an instrument of conflict, we were the bad guys. We were accused of naming and shaming and that is not what you are supposed to do in the United Nations,” Rees said.

Rohrabacher is not going to make everybody happy, said Rees. He will, however, make unequivocally clear that the United States supports freedom.

“In terms of reaching out to people who do share our values, and making clear that you know we don’t seek to be the world’s only super power, but we’d like to be the leader of the free world, it’s good to have somebody who is going to speak about those things,” Rees said.

In an interview published on Breitbart Dec. 3, Rohrabacher doesn’t mince words about his stance on foreign policy.

“I think there are people who are willing to bend over backwards for any tyrant who threatens worse relations with the United States, when in fact it’s when you stand up tall and look the tyrant in the eye that you have more progress and you have more of a chance for peace in the long run,” he said.

“It summarizes the two basic rules of human behavior which are: If you subsidize, you get more of it; and if you penalize, you get less of it.”