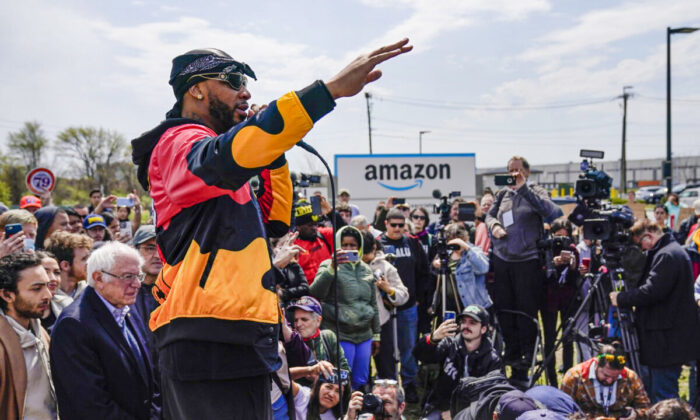 Workers at a Staten Island Amazon Warehouse rejected a motion for unionization on Monday, just one month after a neighboring Amazon warehouse in Staten Island became the first in the United States to form a workers’ union.

In the recent union election at Amazon’s LDJ5 sort center in Staten Island, workers voted 680 to 318 against a measure to be represented by the Amazon Labor Union (ALU), a new worker’s union recently formed to bargain collectively on behalf of American workers at Amazon’s company warehouses.

“We’re glad that our team at LDJ5 were able to have their voices heard,” Amazon spokeswoman Kelly Nantel said in a statement. “We look forward to continuing to work directly together as we strive to make every day better for our employees.”

The results at the LDJ5 election take on an ironic aspect in light of that warehouse’s location, directly across the street from Warehouse JFK8, which broke new ground on April 1 when its workers voted to be represented by the ALU, making it the first unionized Amazon warehouse in the United States with 2,654 votes in favor and 2,131 votes against.

The vote at JFK8 was the culmination of years of controversy between Amazon corporation and the incipient labor movement led by former Amazon supervisor Christian Smalls, who was fired from his position at the company’s warehouse on March 30, 2020, after organizing a walkout in protest of the warehouse’s COVID-19 policies, which Smalls asserted were inadequate to protect workers from the virus.

In the ensuing months, Amazon was accused by the National Labor Relations Board (NLRB) of illegally interfering with organizing efforts by threatening, surveilling, and interrogating employees—allegations which the company vigorously denies.

In the months leading up to the vote, Amazon’s JFK8 Warehouse convened multiple mandatory meetings addressing matters related to unionization, which the ALU has condemned as thinly-veiled attempts at union-busting.

The company maintains a website titled “Unpack JFK8” in which it argues for its position against unionization, claiming that collective bargaining interferes with the relationship between individual employees and Amazon corporation.

The varying outcomes in JFK8 and LDJ5 may be partially explained by different conditions at the two neighboring workplaces: JFK8 employs more full-time workers under more demanding conditions, whereas LDJ5 has a higher share of part-time employees and has lighter work than its larger neighbor.

The proximity and interconnectedness of the two warehouses makes LDJ5 a strategically important workplace for both the union and the employer, as the ALU would likely have greater leverage in negotiations with Amazon if it could unionize both sites.

For proponents of the Amazon labor movement, Monday’s vote at LDJ5 was a disappointment that risks slowing the momentum of the new union.

“Despite todays [sic] outcome I’m proud of the worker/organizers of LDJ5[;] they had a tougher challenge after our victory at JFK8,” Smalls wrote on Twitter. “Our leads should be extremely proud to have given their coworkers a right to join a Union.”

Simultaneously, Amazon has also contended with a separate labor movement—the Retail, Wholesale and Department Store Union—following a unionization vote at an Amazon warehouse in Bessamer, Alabama, last March, in which 400 ballots remain contested. The union was trailing in the initial tally by 118 votes. The NLRB is alleging that Amazon illegally interefered with the unionization effort there, which again, Amazon denies.