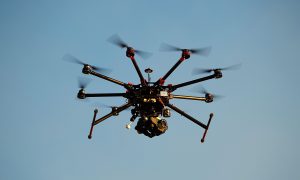 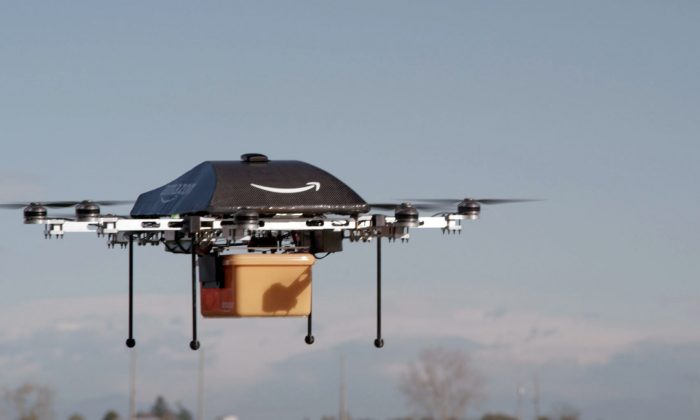 Amazon’s Prime Air unmanned aircraft could deliver Amazon.com products anywhere at any time in 30 minutes or less. German DHL is testing the use of drones for package deliver as well, it was reported on Dec. 9, 2013. (AP Photo/Amazon)
Tech

Amazon Wants Drones to Deliver Straight to the Customer, Literally

This week, Amazon filed a lengthy claim with the U.S. Patent office, disclosing details about its plans for the Prime Air delivery system, which aspires to bring customers their packages within 30 minutes of ordering.

Amazon has already experimented with delivering packages to locations apart from your home: In Germany, Amazon has tested placing packages directly in the trunk of your car. The Prime Air system goes one step further, with designs to deliver straight to the user.

“With the implementations described herein, a user now has the ability to choose ‘Bring It To Me,'” the patent reads. “The user may identify their current location by allowing Global Positioning System (GPS) data to be provided by their mobile device.”

A major principle of Prime Air is customization—not only is the location of the delivery flexible, but the timing too; the service wants to make delivery in 30 minutes possible, but also plans to give users the ability to select a custom delivery time.

All of this will only be possible, of course, with an automated drone system, one that would still be illegal under the Federal Aviation Administration’s (FAA) proposed regulation for drones, which would forbid commercial drones from operating beyond the line of sight of its pilot.

Amazon’s patent claim makes no reference to a pilot, and the company has repeatedly inveighed against the FAA’s proposed requirements that commercial drones be paired with a pilot, warning that red tape could hurt drone innovation in the United States.